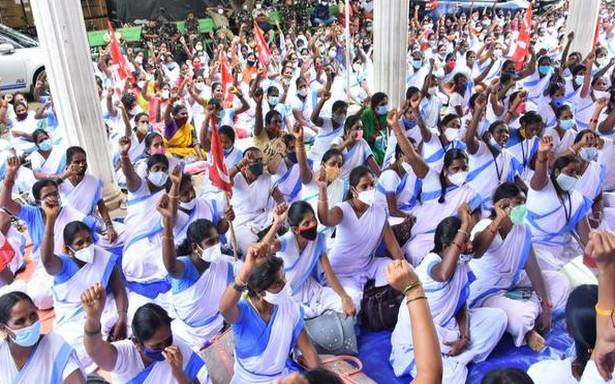 They demand retirement benefits on par with govt. employees

About one thousand Asha workers from all over Chittoor staged a protest in front of the office of District Medical and Health Officer (DMHO) here on Monday, demanding that the State government extend welfare schemes to them, in addition to retirement benefits on par with government employees.

Schemes like YSR Cheyutha, Amma Vodi are not applicable to them. The State government had declared that those earning over ₹12,000 in urban areas would be ineligible for the welfare schemes, but Asha workers were denied the benefits even though they get lesser than the said amount, the leaders said.

Andhra Pradesh Asha Workers Association State general secretary K. Dhana Lakshmi and CITU Chittoor district secretary P. Chaitanya, who led the stir, deplored that they do not get any retirement benefits despite working till the retirement age of 60.

The protesting leaders observed that except for praising their services, nothing tangible was done to support the families of Asha workers who died of COVID-19 in the line of duty, and demanded an insurance benefit of ₹50 lakh to the families of the deceased workers.

Their other demands included a provision of retirement benefit to the tune of ₹3 lakh and dropping the move to scrap welfare schemes for them.

Ms. Dhana Lakshmi said protests would be organised in front of all the District Collectorates in the State on September 13, and the stir would be intensified in a phased manner.