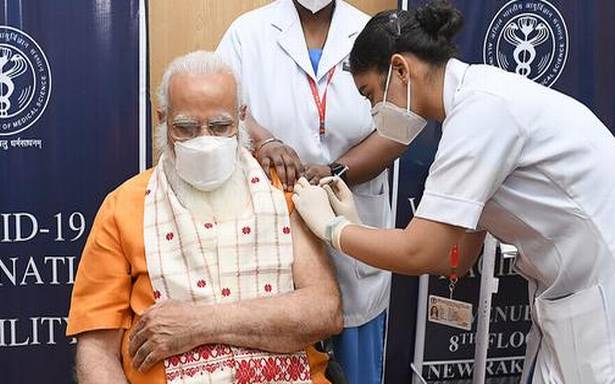 India, even before Independence, was among the countries that indigenously manufactured vaccines almost years within they were discovered, historical records suggest.

Prime Minister Narendra Modi’s speech on Friday presented a view of India’s vaccination history that is at odds with the facts. “If you look at the history of vaccinations in India, whether it was a vaccine for smallpox, hepatitis B or polio, you will see that India would have to wait decades for procuring vaccines from abroad. When vaccination programmes ended in other countries, it wouldn’t have even begun in our country,” claimed Mr. Modi in his address.

The Hindu Explains | What is indemnity, and how will it affect COVID-19 vaccine pricing and availability in India?

India, even before Independence, was among the countries that indigenously manufactured vaccines almost years within they were discovered, historical records suggest.

While there have been several challenges to the uptake of vaccines, their availability was the least of the problems.

Also read: U.S. vaccine ‘gift’ to India may not be substantial

A vaccine for smallpox, as a history of vaccination in India published in the Indian Journal of Medical Research (IJMR), by Dr. Chandrakant Lahariya, in 2012, says was first administered to a three-year-old India, in 1802, a mere four years after English physician Edward Jenner published result of his experiments on inoculating subjects with a cowpox virus.

The smallpox vaccines were imported into India until 1850 but preserving the liquid lymph solution was a challenge. This led to institutes in India researching ways to increase lymph supply with early success by 1895.

The first animal vaccine depot was set up in Shillong in 1890 from where it started to be produced.

While vaccination never ceased in India once it began, it had varying popularity. There was hesitancy, opposition from ‘tikadaars’ (who performed variolation) and those actually administering vaccines charged a small fee contributing to its fluctuating uptake.

“The vaccination coverage went down and in 1944-1945 in India, the highest numbers of smallpox cases in the last two decades were reported. As soon as the World War II ended, the focus was brought back on smallpox vaccination and cases decreased,” says Dr. Lahariya, “In 1947, India was self-sufficient in the production of smallpox vaccines.”

The years also saw changes in the smallpox vaccines, experiments on the appropriate dosage, monitoring of adverse events. Smallpox was eliminated in North America and Europe by 1953.

In 1959, the World Health Organization (WHO) started a plan to rid the world of smallpox. This was again a challenging programme that saw variable success and only a Intensified Eradication Programme in 1967, according to a historical note on the website of the U.S. Centres for Disease Control. It took until 1971 to eradicate the virus in South America and 1975 in Asia (and India) and 1977 in Africa. The challenge, said Dr. Lahariya, was not lack of access to vaccine but social and economic factors surrounding vaccination.

The history of polio vaccination in India is more complicated. “India was also the pioneer-leader in polio research — epidemiology, vaccine-prevention — and in the manufacture of both Oral Polio Vaccine (OPV) and Injectible Polio Vaccine (IPV). India’s lead position was squandered in later years due to short-sighted policies and capricious decisions, a blot in our history of public health,” write T. Jacob John and M. Vipin Vashishta in 2013 edition of the IJMR.

The inactivated polio vaccine, that was developed in the U.S. by Jonas Salk and successfully used for polio eradication campaigns, was also adopted in some European countries.

The OPV was developed by 1960 and over the years proved itself a better vaccine because it could be given sans an injection, worked quickly and conferred longer immunity.

The Pasteur Institute of India developed and produced, for the first time in India, an indigenous trivalent OPV in 1970. Manufacture of the IPV was discouraged in India primarily because there were worries that the seed virus, necessary for manufacture, could escape out of the lab. It was not until 2006 that IPV was licensed for manufacture in India.

Over the years, it was observed that the OPV had lowered efficacy, was linked with not only seeding new vaccine derived polioviruses (VDPVs) but also caused vaccine-associated paralytic polio (VAPP). It was through the use of a combination of both kinds of vaccines, concerted sustained campaigns, huge historical endemic presence of the virus, the populations at risk and inadequate attention by governments to boost vaccine production that it required until 2011 to eliminate polio. Again, it was not because India was unable to make those vaccines.

The Prime Minister also claimed that since 2014, the Mission Indradhanush programme had increased the percentage of children covered under vaccination from 60% to 90%. The latest round of the National Family Health Survey, that only provides data from 17 States and five Union Territories, showed that none of the States had achieved 90% vaccination coverage. The Health Ministry had released data on this on December 2020 and was expected to provide data from remaining States by May this year. Only five States: Himachal Pradesh, West Bengal, Karnataka, Goa and Sikkim exceeded coverage by 80% with Himachal Pradesh touching 89%.

A vaccine for against the bacterium causing plague was made by Waldemar Haffkine at the Grant Medical College, Bombay, in 1897 that he first tested on himself and later on, on the inmates of Byculla jail. A Plague Laboratory was set up in 1899 and in 1925 renamed the Haffkine Institute.

Several vaccine institutes came up in different provinces of the country, including the 1948 BCG (for tuberculosis) Laboratory in Guindy, Madras. These institutes enabled the manufacture of vaccine for diptheria, pertussis and tetanus in India, before 1940.

Several public sector vaccine units that produced much of India’s vaccines were, at various instances, shut down, or their capabilities diminished, giving way to private companies such as the Serum Institute of India and Bharat Biotech to become the vaccine manufacturing power houses and global suppliers.