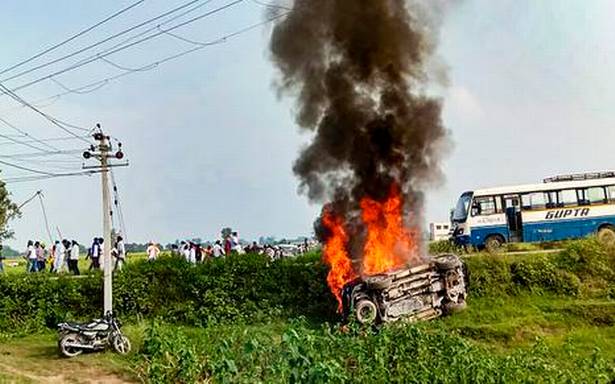 Farmer bodies on Sunday claimed that two farmers protesting against BJP leaders were killed and several others were injured after they were run over by a car allegedly part of a convoy of Union Minister of State for Home Affairs and BJP MP Ajay Kumar Mishra in Uttar Pradesh’s Lakhimpur Kheri district.

Farmers in Tikonia area of Kheri had lined up on the roads with black flags to protest against the visit of Deputy Chief Minister Keshav Prasad Maurya to the district.

The Samyukta Kisan Morcha, a body of farmers protesting against the three new farm laws, said the car was driven by the MP’s son Ashish. A third farmer died after being shot, the SKM claimed.

The claims could not be independently verified yet and U.P. police are yet to comment on the incident or casualties.

Following the incident, angry farmers set on fire and vandalised vehicles of the BJP leader and staged further protests as the area remained tense. Senior officials from Lucknow as well as farmer leaders rushed to the spot.

Official statements from the police and the BJP leaders accused by the farmers for the incident are still awaited. Mr. Mishra told a Hindi news channel in a phone interview that the driver of his car, which was going to receive Mr. Maurya at the helipad to attend a programme in a village, was injured and died after being struck by a stone. The driver then lost control of the car causing the "accident", he told News1 India channel.

Mr. Mishra, also known as Teni, said he had invited Mr. Maurya as the chief guest at the annual wrestling event held in his village in the district–the Ambika Prasad Mishra Smriti Kushti Pratiyogita.

The car was going to receive the Deputy CM from the helipad, said Mr. Mishra. "Someone pelted stone at the driver, he lost consciousness and died. He lost control of the car which caused an accident…some people were injured in the incident and some lost their lives," the minister and two-time MP said.

The SKM said three farmers were killed and around 10, including SKM leader Tajinder Singh Virk, were seriously injured in the incident.

SKM leader Darshan Pal said farmers had planned to gherao a helipad to prevent UP Deputy CM Keshav Prasad Maurya from landing. After the protests, the farmers were going back when three cars in the convoy of Mr. Mishra ran over the farmers, he alleged.

Mr. Pal claimed that Mr. Mishra, his son Ashish, and his brother were in one of the cars. While one farmer died on the spot, another succumbed to injuries in a hospital, he said. Mr. Pal demanded that a murder case be lodged against Mr. Mishra, who is MP from Kheri, his son and other persons involved, and that Mr. Mishra be dismissed as a minister.

Rakesh Tikait, BKU spokesperson, left for Lakhimpur Kheri from Ghazipur. Before leaving, he said that farmers were also fired at. A large number of farmers had started assembling in Lakhimpur Kheri for a black flag protest against Mr. Maurya and Mr. Mishra, for the "open threat issued against farmer leaders" in a public meeting, said the SKM. The farmers gheraoed the helipad at Maharaja Agrasen ground to prevent Mr. Maurya from landing. The incident took place as the farmers were dispersing and leaving from the protest site.