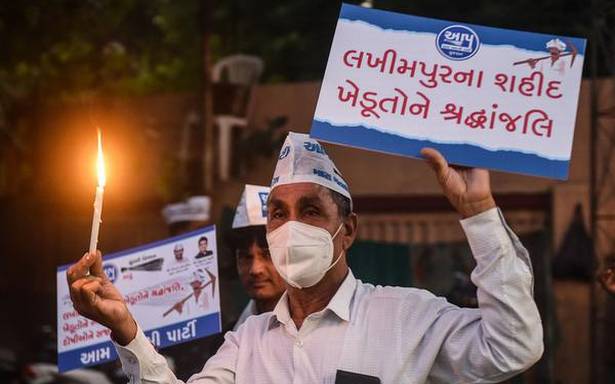 They defend themselves against SC comments on right to protest

Farm unions protested in various parts of the country on Monday demanding a Supreme Court investigation into the deaths of farmers allegedly run over by a vehicle in a Union Minister’s convoy in Lakhimpur Kheri in Uttar Pradesh the previous afternoon. At the same time, the Samyukt Kisan Morcha platform of the protesting unions responded to the comments made in the apex court on Monday, defending their right to protest the farm reform laws even while the issue is in the court.

Protests began overnight, with candlelight vigils and highways being jammed at several locations, including Ambala, Kurukshetra, Chandigarh and Puranpur, according to the SKM. Farmers also poured into Tikunia, the town where the bodies of the farmers were kept.

Later in the day, farm unions and political workers protested in front of the district Collectors’ offices in a number of States, submitting copies of a memorandum to President Ram Nath Kovind to district officials with the demand that Minister of State for Home Affairs Ajay Kumar Mishra be immediately dismissed from his post and a case filed against him for inciting violence and spreading communal hatred.

They also urged that Mr. Mishra’s son and others associated with the attack not only be booked under Section 302 (murder) but also arrested immediately, calling for the case to be handled by a Special Investigation Team under the supervision of the Supreme Court.

In Delhi, an agitation was held in front of the Uttar Pradesh Bhavan by the youth and women’s wings of the Congress, as well as farm unions and workers affiliated to the Leftist parties. Protesters were detained and then released in the evening.

Leaders of some farm unions based in Punjab and Haryana said they were prevented from going to the spot of the incident, including Buta Singh Burjgill, president of the Bharatiya Kisan Union’s Dhakaunda faction, as well as Gurnam Singh Chaduni, who heads another BKU faction in Haryana and who was detained in Meerut. However, it was western U.P.-based BKU leader Rakesh Tikait who mediated the ground negotiation between the local community and the administration.

Although they expressed outrage at the U.P. government’s letter to the Punjab government asking that no one from the State should be allowed to enter Lakhimpur Kheri, several SKM leaders who did not wish to be named played down the regional and communal faultlines in the region, emphasising the unity of farmers instead.

On a day when the SC made strong comments accusing farmers of strangulating Delhi with their protests and asking why the agitation was needed when the issue of the farm laws is in court, the SKM emphasised that it has never approached any court to resolve the issue. “There is no question of the farmers’ movement entering the Courts and seeking justice, and protesting at the same time. The petitioner in this case has got nothing to do with the SKM,” said a statement.

“The SKM has always believed that the three Central laws which reflect the anti-farmer policy directions adopted by the Union government have to be repealed by the government itself…While the laws might have been suspended from implementation for now [by the order of the SC], the SKM realises that the stay can be lifted any day.”

With regard to the SC notice to 43 farm leaders on blocking highways around Delhi, the SKM reiterated that they had not put up any barricades or blockades. “Farmers have in fact kept the roads clear for traffic on both sides at the morcha sites. Public inconvenience if any is being caused by the police who have barricaded the highways,” said the SKM statement.