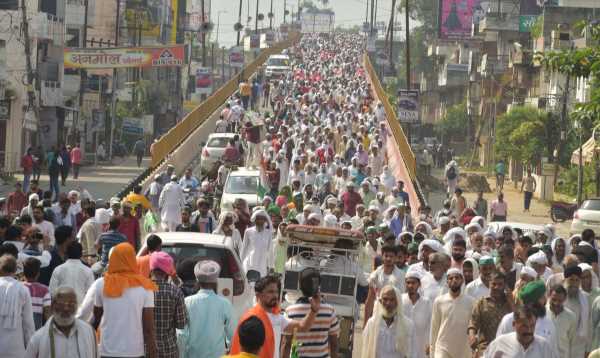 Farmers from the Samyukta Kisan Morcha, who are currently holding Haryana Chief Minister M L Khattar’s constituency Karnal to ransom, plan to hold 17 mega meetings in cities, including Lucknow, Varanasi, and Gorakhpur, over the next six months and will call for an all-India strike on September 27.

The strike will follow a meeting of many Opposition leaders — including some alliance partners of the Bharatiya Janata Party — against the Union government’s farm laws on September 25 at Jind in Haryana.

In the current circumstances, unless the BJP acts to stem the damage, it may find itself dented by farmer protests in the Uttar Pradesh elections due next year.

What has complicated matters is the endorsement of a section of Rashtriya Swayamsevak Sangh-affiliated farmers endorsing the central issue of the protest, while holding back from active participation.

The party had planned its own outreach. But for many reasons, this has been muted.

Kameshwar Singh, the head of the BJP’s Kisan Morcha in UP, had announced the party would launch a big farmer outreach programme from August 16, including what was billed as a massive farmer rally in Lucknow.

Inexplicably, those plans were shelved and were replaced instead with low-key farmer samvad (dialogue) in many districts.

The party has said it will now hold meetings once the sugarcane crushing season and rabi cultivation starts.

“I cannot understand why the farmers are against the farm laws. They have all the freedom to sell their crop from any platform they want,” Madhya Pradesh CM Shivraj Singh Chouhan told Business Standard.

The BJP’s Kisan Morcha President, Raj Kumar Chahar issued a statement lauding the Centre’s move to hike minimum support price, but did not address the central issue his other colleagues have flagged.

Political leaders, earlier banned from the dais of farmer gatherings, are now free to attend meetings.

The parallel platform to be addressed by political leader on September 25 is testimony to the fact that electoral politics is going to be an important part of farmer protests going forward.

In an attempt to stave off the damage, in UP the BJP government has taken many steps.

It hiked the state advisory price for sugarcane last month and has withdrawn all cases of stubble-burning against farmers.

However, the party is facing problems from its own sister organisations. Although the farmers of Maharashtra are only nominally affiliated to the SKM protests in north India, workers of the RSS-affiliated Bharatiya Kisan Sangh staged demonstrations in Nagpur as part of its nationwide agitation to press for ‘remunerative price’ to farmers for their produce to cover their production cost and called for ‘improvement’ in the Centre’s new farm laws.

The BKS has stayed out of the north Indian confederation of farmer bodies, charging political interests and not farmers’S welfare is at play in the ongoing protests.

But Nana Aakhre, president of the BKS’sVidarbha unit, told reporters that the Union government should either bring a new legislation or make changes in the agri-marketing laws to add a provision for payment of MSP for major farm produce.

Farmers should get a ‘remunerative price’ for their produce to cover their production cost, which they don’t receive in the existing system, he said.

This endorses the position taken by SKM.

Aakhre further indicated that the organisation will intensify its agitation in the coming days if these demands are not met.

The SKM’s executive committee will decide further course of action.

But at least till September 25, the Karnal gathering of farmers will stay put, shifting to UP to keep up the pressure after that.