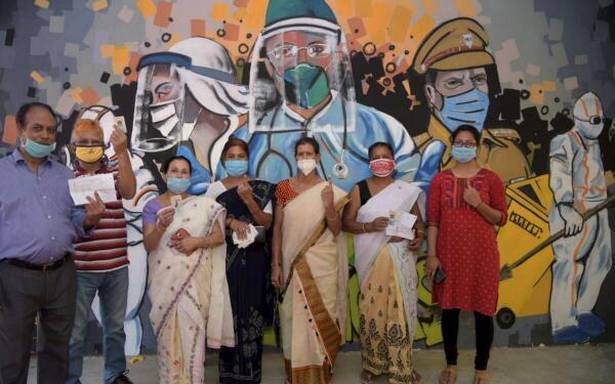 More than 82% of 79,19,641 general electors exercised their franchise in the third and final phase of voting across 40 of Assam’s 126 Assembly on Tuesday.

The 82.28% estimated till 7 p.m. – officials expect the figure to increase after reports from all polling stations are received — is the highest among the three phases. While the first phase on March 27 covering 47 seats recorded 79.97%, the second phase on April 1 for 39 seats recorded 80.96%.

Chief Electoral Officer Nitin Khade said voting was by and large peaceful barring a few incidents of violence and disturbances in at least four of the 11,401 polling stations.

A rumour that votes cast wearing masks would get transferred to a particular candidate triggered violence at the 2008 Dighaltari polling station under the Golakganj constituency in western Assam’s Dhubri district. Five people, including two women and two security personnel, sustained injuries after the police fired blanks to prevent two groups from fighting.

The police resorted to lathi-charge after the mask rumour led to stone-pelting at Gutipara polling centre under the Bilasipara West constituency, also in Dhubri district. This caused disruption in polling for at least 30 minutes and four people were detained.

“The rumour triggered tension at several polling stations in Dhubri. We have identified more than 10 people responsible for the Golakganj incident,” Anand Mishra, SP, said. Lathi-charge was also reported from a polling booth under the Bongaigaon Assembly seat while the police detained two people at a booth in Guwahati for distributing pamphlets for a BJP candidate inside the centre.

Election officials said Dispur with 607 polling stations had the most voters (4.12 lakh) in this phase while the Dharmapur seat had the least with 1.42 lakh voters.