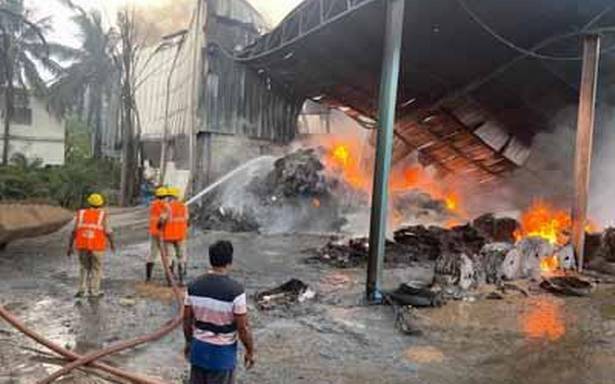 No fire fighting system was installed in the factory, says official

Fire broke out in a plastic bags and material manufacturing company, located at Tempalli village in Krishna district, in the early hours on Friday. However, no casualties were reported.

Local residents and the factory workers, who noticed flames in Sri Vidya Polymers, near Pedavutapalli village on the outskirts of Vijayawada, alerted the fire and police personnel around 5.50 a.m.

“The factory management did not obtain permission from AP State Disaster Response and Fire Services Department. No fire precautionary measures and fire fighting system was installed on the factory premises,” Mr. Srinivasulu said.

“The Fire Department officials visited the factories and other manufacturing companies in the industrial areas at different places across the State, and served notices to obtain ‘Fire NOC’. We also instructed the managements to put in place the fire fighting systems,” he told The Hindu.

“The Fire and Police officials took measures to prevent the spread of fire to the nearby factories. Loss of property is yet to be estimated,” Mr. Paul said.