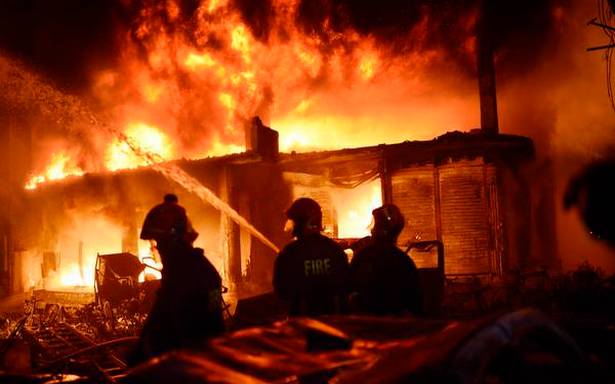 A three-judge bench made the observation while setting aside an Allahabad High Court order which had termed the fire in the warehouse of a company as an ‘act of God’.

A fire accident cannot be termed as an ‘act of God’ if it did not happen due to the operation of any external natural forces like storm, floods, lightning or earthquake, the Supreme Court has said.

A three-judge bench headed by Justice A.M. Khanwilkar made the observation while setting aside an Allahabad High Court order which had termed the fire in the warehouse of a company as an ‘act of God’ and exempted excise liability of the company engaged in the manufacture of liquor.

“The present one had not been a case where anything related with the forces of nature like storm, floods, lightning or earthquake had been in operation or caused the fire.”

“When nothing of any external natural force had been in operation in violent or sudden manner, the event of the fire in question could be referable to anything but to an act of God in legal parlance,” the bench also comprising Justices Dinesh Maheshwari and Krishna Murari said.

The top court also said the fire in question had not taken place due to any mischief by any person.

“Noticeably, the fire that started around 12:55 pm on April 10, 2003 could be brought under control by the firefighters only by 5 am the next day.”

“When all the relevant factors are cumulatively taken into account, we find it difficult to accept that the fire and the resultant loss had been beyond the control of human agency so as to be termed as inevitable accident,” the bench said.

The top court said the fire had not generated on its own and with appropriately laid fire proof electrical installations as also firefighting measures, the incident was an avoidable one or at least the loss could have been minimised.

It said the observations of the high court in this regard do not appear sound and are required to be disapproved.

The top court was hearing an appeal filed by the Uttar Pradesh Excise Department challenging an order of the high court which quashed the demand raised against McDowell company towards loss of excise revenue because of destruction of liquor in fire.

The high court had said the order passed by the excise commissioner seeking Rs 6.39 crore as excise revenue was based on conjectures and without any cogent evidence about negligence on the part of the company and that the “incident was nothing but an act of God”.