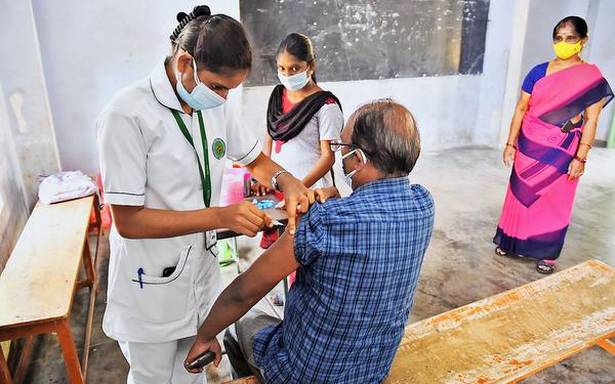 Residents due to get their second shots must come forward and get vaccinated, the Minister said

The Minister said that additional focus was given to districts that had low seroprevalence. Additional doses of vaccines were allocated to such districts.

Medical camps will be organised in 50 places, including two in Chennai, across all districts as a part of “Varumun Kappom”, a preventive healthcare scheme of the State government, on Tuesday. Every year, 1,250 camps are planned under the scheme that was recently re-launched by the Chief Minister, in Salem.

The Minister said that former CM M. Karunanidhi launched the scheme in December 2006 but it was not implemented in the last 10 years of AIADMK rule.

There would be 17 halls on the activities of the Health Department, as well as awareness campaigns. More than 20 healthcare services such as general medicine, general surgery, maternal and child healthcare, screening for renal diseases, cervical and breast cancers, and diagnostic services such as ultrasound and ECG would be available.

The camps would be held from 9 a.m. to 4 p.m. Those who needed higher treatment such as for eye surgery or cardiac surgery would be referred to the district headquarters hospitals or government medical college hospital. While COVID-19 vaccination services would be available at these camps, a facility to get the Chief Minister’s Comprehensive Health Insurance Scheme cards would also be available, the Minister said.

He added that during the rainy season, special medical camps would be held in corporations such as Chennai.