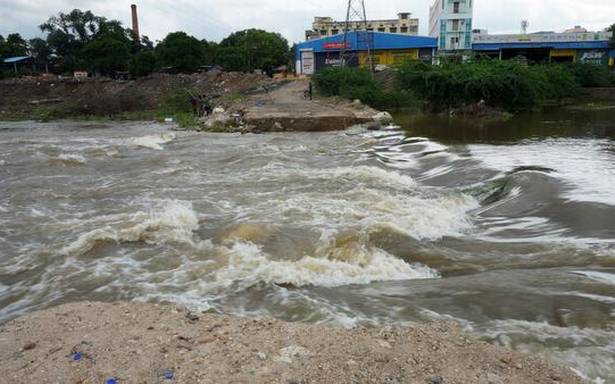 With steady inflow in Vaigai dam and widespread rain in the catchment areas, the PWD engineers have issued the first flood warning as the storage level in the dam reached 66 feet (max level 71 ft) with an average inflow of 4,025 cusecs and a discharge of 969 cusecs at 10 a.m. on Saturday.

The PWD engineers said that the Vaigai dam, which was constructed 64 years ago, had five times witnessed maximum storage level twice in a calendar year due to rainfall in January and June.

“However, this (2021) year may be the first time, that the dam is likely to reach the maximum level for the third time in a single calendar year”, the PWD engineers said as rainfall continued in the catchment areas in Periyar dam and surrounding pockets.

The water in the dam was being used for both irrigation and drinking purposes in Theni, Madurai, Dindigul, Ramanathapuram and Sivaganga districts.

The PWD engineers, in coordination with the police and revenue departments have cautioned the people to stay away from venturing near the Vaigai river in Madurai city. As a precautionary measure, barricades have been installed along the banks on both sides, the officials said.

The police have also installed check posts on the Alwarpuram, Kuruvikaran Salai, near PTR Bridge, Arapalayam (Amma bridge) and among other causeways.

Similarly, authorities have put up sign boards cautioning the people near Sellur, Aruldosspuram and other areas to ensure that cattle was not left unattended.

A senior police officer said that with water flow likely to be forceful from Sunday morning, the bridges would be under surveillance as people stood on parapet walls and took selfie on their mobile phones, he added.