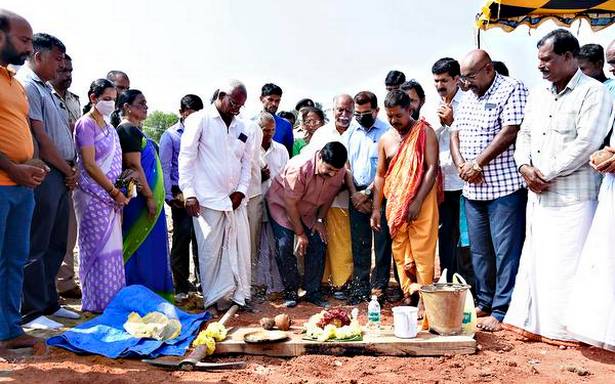 It will be built at a cost of ₹3.37 crore and will cater to the needs of 150-odd fishermen

Mangaluru City South MLA D. Vedavyas Kamath initiated the work for the construction of the first fish landing-cum-berthing basin for traditional fishing boats at Bengre by laying the foundation stone for the project on Saturday.

The basin will be constructed at a cost of ₹3.37 crore and it will come up on the either sides of the ferry point in Tota Bengre. It will cater to the needs of 150-odd fishermen from the city who use traditional boats.

“You (traditional boat fishermen) have been demanding a basin for a long time. It will be ready in another 18 months,” Mr. Kamath said in his address during the function.

Assistant Engineer, Fisheries Department, Manohar Acharya, said the basin would be 90-metre-long and 80-metre-wide. The river basin will be dredged by 2 metres to accommodate 150 boats. Two diaphragm walls each of length of 56 and 36 metres, respectively, will be constructed.

Mr. Acharya said the project was sanctioned in 2018. It took time in getting clearance from the Coastal Regulatory Zone Authority and subsequently tenders were floated three times. The work order was issued in September 2021.

Ajith Bengre, president of the Association of Traditional Boat Fishermen, said the traditional boat operators were facing a problem with frequent operation of Indian Coast Guard’s hovercraft on the river.

Mr. Bengre said when hovercraft sails it generates waves of great intensity, which is causing damage to traditional boats which are closely berthed. “We have pointed out at this issue to the Coast Guard authorities and asked them to operate it with less speed. But the Coast Guards said they are helpless,” he said and asked the Fisheries Department to construct a breakwater for the basin that was being constructed.

While asking the Fisheries Department to seek clearance for building the breakwater, Mr. Kamath said he would discuss with experts about the problem and arrange funds from the Government for its construction.

Mr. Kamath later laid the foundation stone for the construction of a Skill Development Centre at the cost of ₹2 crore at Kasba Bengre. Women from minority communities would be trained in tailoring and computers at this centre, he said.