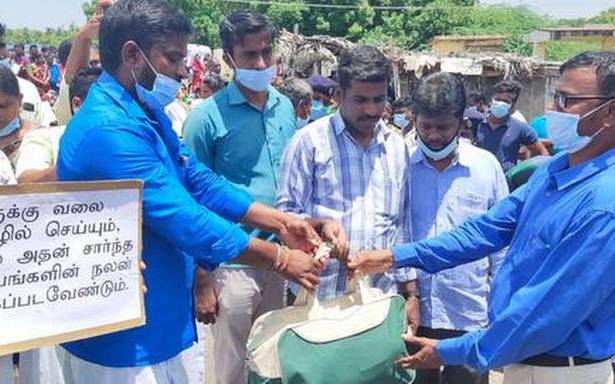 Fishers in Poompuhar-Tranquebar belt continued their relay fast against the ban on use of purse seine nets for the third day on Monday.

At Tranquebar, over 600 families of fishermen belonging to Chandrapadi surrendered their family and Aadhaar cards at the office of Tahsildar.

They walked for five km from their village to surrender their family and Aadhaar cards.

Senior police and revenue officials held talks with the fishers who insisted that the government should either permit them to utilise purse seine nets or implement the Tamil Nadu Marine Fishing Regulation Act 1983 in toto.

The Act stipulated that mechanised vessels would not be permitted to undertake fishing operation in the sea within five nautical miles from the coast line in the State.

Likewise, motorised country craft with single or multiple engines having capacity of eight horse power and above must not operate within three nautical miles from the coastline.

However, fishers from Akkaraipettai and other fishing centres in Nagapattinam district were supportive of the ban on purse seine nets under Tamil Nadu Marine Fishing Regulation Rules, 2020, but were critical of other regulations for operation of motorised crafts and mechanised vessels.

Meanwhile, Minister for Fisheries, Fishermen Welfare and Animal Husbandry Anitha R. Radhakrishnan, who was on an official visit to Nagapattinam, urged fishers to comply with the government’s rules on the issue of ban on purse seine nets.

District authorities would hold talks with fisher representatives for resolving the issue, he added.