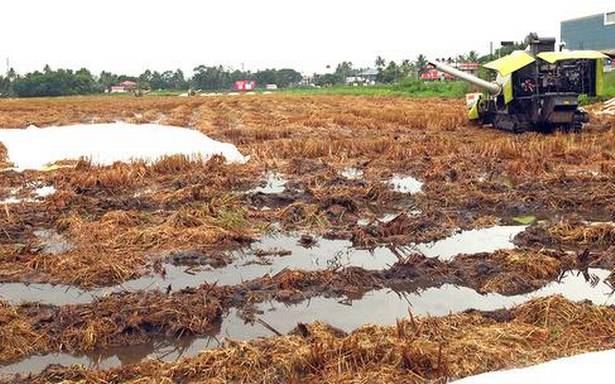 Heavy rains that lashed the region over the past couple of days and an increase in flow of floodwaters from the eastern side have inundated several low-lying areas in Alappuzha district.

The district administration on Saturday opened a relief camp at Venmony in Chengannur and shifted 20 people from six families there. Officials said more relief camps would be opened in the taluk as floodwaters had entered several houses.

The administration also opened 50 gruel centres in Kuttanad taluk. Heavy downpour coupled with a rise in water level in rivers have raised the spectre of floods at Thalavady, Neerattupuram, Edathua, Thakazhi, Muttar, Chennithala, Mannar, and Pallipad among other places in Upper Kuttanad. Parts of the Alappuzha-Changanassery (AC) Road and several rural roads in Upper Kuttanad and Kuttanad have been waterlogged.

The water level in major rivers in the region, including the Pampa, Manimala, and Achencoil, has increased significantly. Waterlogging has also been reported from parts of Alappuzha town. With the more rain forecast in the coming days, the district administration has made arrangements to meet with any emergency. Officials said that people would be shifted to safer places if needed.

The inclement weather has stalled harvesting and procurement of paddy (second crop) in Kuttanad. Farmers said combined harvesters were getting stuck on the field due to waterlogging and there was no choice but to abandon the crop altogether. Farmers had cultivated paddy in 8,600 hectares in the second crop season in the district. The crop in only around 2,000 hectares has been harvested so far.

Farmers in the region have already been facing difficulty in harvesting the crop due to a severe shortage of combine harvesters and the latest bout of rain and waterlogging has meant a double whammy for them. In October, paddy in 538.6 hectares was destroyed in floods.