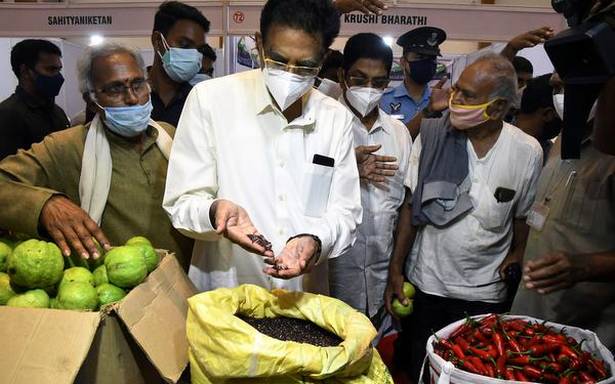 Mizoram Governor Kambhapati Hari Babu has underscored the need to set up an organisation to promote agricultural organic exports from Andhra Pradesh.

Later, addressing the gathering, Mr. Hari Babu said Prime Minister Narendra Modi was emphasising on promoting districts as export hubs. The officials had to identify potential export sectors and fix the logistics bottlenecks while taking up district-specific approach. Andhra Pradesh could take lead in agri and organic exports in the country, he said.

Andhra Pradesh had already been leading in cultivation, yield and export of many agricultural products. The farmers from the State had proved their mettle wherever they went. They could take lead in organic farming as well and set an example to other States. Bringing down the expenditure on pesticides would automatically bring down the cost of cultivation, he said.

Principal Chief Conservator of Forests (CAMPA) Chiranjeevi Chowdary, who earlier served as Horticulture Commissioner, stressed on the need for research in organic farming. Universities and research stations could make use of the plots of organic farmers to study and come up with plans and suggestions to make organic farming more profitable, he said.

Horticulture Commissioner P. Sredhar emphasised on the need for cutting down expenditure on fertilizers and chemicals. Andhra Pradesh was lagging behind other States with regard to organic farming. States like Madhya Pradesh and Maharashtra were ahead of AP. The government was extending a benefit of ₹10,000 per hectare to promote organic farming, he said.