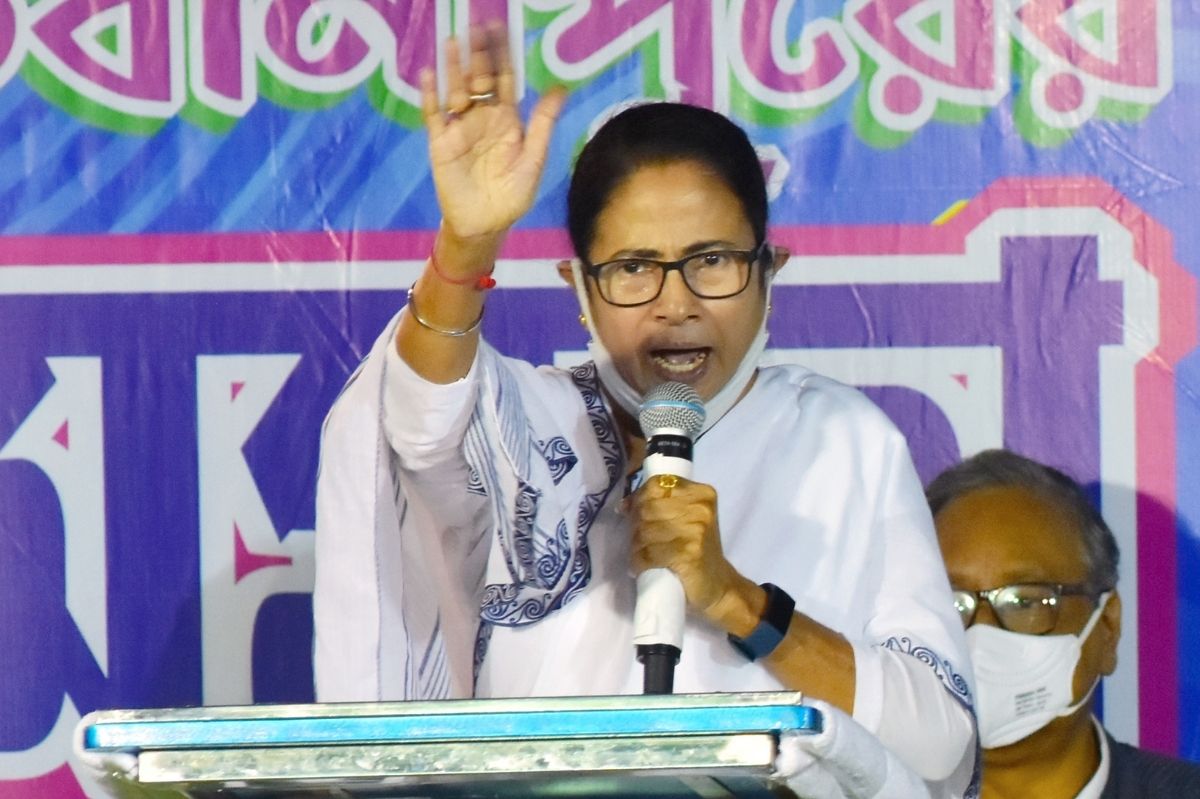 Naturally, the West Bengal chief minister is not leaving anything to chance, reports Ishita Ayan Dutt.

After the high-octane assembly elections in West Bengal, a by-poll would have gone unnoticed. But when the name of the candidate is Mamata Banerjee, who happens to have lost her seat despite leading the party to a thumping victory, the chances of a low-key by-poll are but remote.

The party flags, posters, cut-outs along the road to Bhabanipur signal that it is battle-ready. The Election Commission has allowed only door-to-door campaigns and street corners and not rallies. But there is no stopping a high-voltage campaign.

In the season of floor-crossings between the Trinamool Congress and the Bharatiya Janata Party, Banerjee had sprung a surprise in January by announcing her candidature from Nandigram. The idea was to take on her protégé-turned-adversary Suvendu Adhikari head-on. But the gambit cost her; Banerjee won West Bengal hands down but lost Nandigram.

To remain the chief minister, she must be elected within six months, which would be the first week of November.

A six-time MP from Kolkata South (which includes the assembly segment of Bhabanipur) and a two-time MLA from Bhabanipur, the Trinamool Congress is more than certain of her win.

“She is the daughter of Bhabanipur. The people of Bhabanipur will vote for their daughter,” said TMC leader Partha Chatterjee.

Yet, Banerjee is not leaving anything to chance. Party heavyweights like Chatterjee, who is the minister of industry, commerce and enterprise, IT and electronics and parliamentary affairs, along with other cabinet ministers, Firhad Hakim, Aroop Biswas, Subrata Mukherjee, and Sobhandeb Chattopdhyay, have been put in charge of different wards.

Political observers also point to how the delivery of the government’s welfare schemes was stepped up even after the assembly elections, possibly keeping the by-polls in mind.

The second edition of Duare Sarkar (government at doorstep) — a mass outreach programme to deliver different schemes of the government — has seen a huge response, with the Lakshmi Bhandar (monthly basic income scheme for women) and Swasthya Sathi (universal health scheme) being the top draws.

But the BJP is raring to put up a good fight and hoping for a repeat of Nandigram.

“They are making full preparations for this election. Cabinet ministers, MPs and MLAs have been put in charge. It is clear that they are not taking the BJP lightly,” said Dilip Ghosh, former BJP president in West Bengal.

The party has lined up a list of 20 star campaigners, who include central ministers Smriti Irani and Hardeep Puri.

The BJP has pitted Priyanka Tibrewal against Banerjee. Legal adviser to former Union minister Babul Supriyo, Tibrewal had contested the assembly polls but lost to her TMC rival by a wide margin. In a surprise move recently, however, Supriyo joined the Trinamool. After assembly elections, four MLAs, including Mukul Roy, switched over from the BJP to the TMC. But what perhaps is particularly embarrassing the saffron party is that Supriyo was also part of the list of star campaigners for the Bhabanipur by-poll.

But the party could be banking on the cosmopolitan demographics of the constituency to go in Tibrewal’s favour.

“Marwaris, Gujaratis, Punjabis, and other non-Bengali speakers are about 40 per cent in Bhabanipur. Muslims are almost 20 per cent. Bengalis, traditionally living there, migrated to the outskirts of the city gradually as the price of real estate started rising. The non-Bengalis probably are in a majority in 70 and 72 wards,” said political analyst Sabyasachi Basu Ray Chaudhury.

The constituency is composed of eight wards of the Kolkata Municipal Corporation.

“To win, the BJP must get 6-7 per cent of the Muslim vote bank,” said Chandra Kumar Bose, who was the BJP’s candidate against Banerjee in the assembly elections of 2016. In 2019, he contested from Kolkata South. Bose is the great-nephew of Subhas Chandra Bose.

On the BJP’s performance in Bhabanipur, Bose pointed out although by a slender margin of 185 votes, it was able to take a lead in the 2014 Lok Sabha elections.

In the recent assembly elections, however, Sobhandeb Chattopadhyay won by 28,719 votes. Chattopadhyay resigned from his seat to make way for Banerjee.

But the party has fielded 31-year-old lawyer Srijib Biswas against Banerjee after the Congress decided not to put up a candidate. “We continue to fight,” said Salim.

Although a by-poll, parties are getting the messaging right ahead of the Lok Sabha elections of 2024. The Congress may have decided not to put up a candidate, keeping the larger interests of the general elections in mind.

Banerjee’s message to the party workers too has been loud and clear from the very beginning. “Do not take the by-polls for granted, this is the next step for the 2024 Lok Sabha elections.”