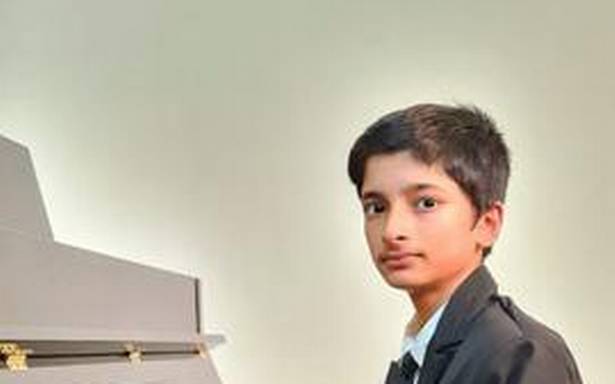 For 12-year-old Sourojit Dutta, pandemic proved a blessing in disguise.

While others kept cursing their fate after being forced indoors, the Standard 6 student from Kolencherry simply dedicated himself to brushing up on his potential in piano.

That has paid rich dividends, as the youngster has cleared the Associate of Trinity College London (ATCL), a level-4 diploma in music performance offered by the acclaimed college.

Consisting of eight grades that usually take five years to complete, Sourojit wrapped it up in six months and cracked the exam with a 40-minute flawless recital of some of the toughest western classical pieces. Going by the Book of India Records, he is the youngest Indian to clear ATCL.

“I was determined not to waste my time during the pandemic and practised really hard on the acoustic piano my dad gifted me. I practice six hours a day,” the young musical prodigy said.

His instructor, Anil K. Cheriyan, who runs a music academy at Kolencherry where Sourojit has been a student for the last four years, recalled how his ward skipped the lower grades and straightaway appeared for the eighth grade and followed it up with ATCL, a post-nominal diploma. “The ease with which he plays tough western classical pieces is just unbelievable. Compositions by legendary western classical musicians remain his favourites,” Mr. Cheriyan said.

That he chose tough western classical pieces by Beethoven, Frederic Chopin, and Franz Liszt was, therefore, instructive. “They were all great composers of their times, and I thought I would better play their pieces,” said Sourojit.

Music runs in his family that is originally from Midnapore in West Bengal but settled down here 15 years ago. His father, Sumit Dutta, who heads the department of community medicine at Kolencherry Medical Mission Hospital, is a trained tabalist and is now researching in ‘Hindustani Music and Music Therapy’, while his sister is a passionate violin practitioner.

“I was amazed to see my son reproducing the songs on the keyboard he had listened his sister played on violin. Then he started listening to western classical compositions by legends online. He could not reproduce them in his keyboard, and that is when I bought him an 88-key piano,” said Mr. Dutta.

Sourojit is also building a repository of his own original compositions, which already has 20 compositions. He wants to compile his compositions and bring out an album in the future.

“I want to be a concert pianist and also teach piano,” he said.