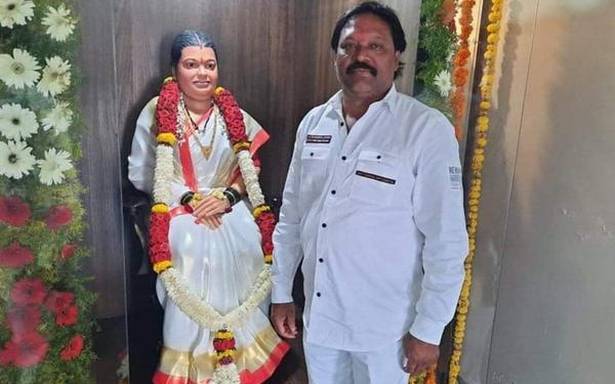 Shiva Chougule, former member of the city corporation council of Belagavi, has installed a plaster of Paris statue of his deceased wife Maina Bai at home. On most days, he worships it, by offering arati, flowers and sindhur.

Maina Bai, who had also served as a corporation council member, died of pneumonia a few months ago. “It was very painful to let her go. We had both recovered from short illnesses. But she contracted pneumonia and died of it,’’ he said.

The life-size statue is installed in a corner of the living room of his house in Margai Nagar, Belagavi.

“I was missing her everyday. I decided I could not go on like that. By that time, someone told me about a businessman who had installed a bust of his wife in Maharashtra. I contacted Sandeep Gopal Kumbar who makes Ganesh idols in Belagavi. I then gave him photos of my wife and he created the statue in 45 days,’’ Mr. Chougule told The Hindu.

He has set up a charity trust in her name. He also plans to open a charity hospital in memory of his wife.