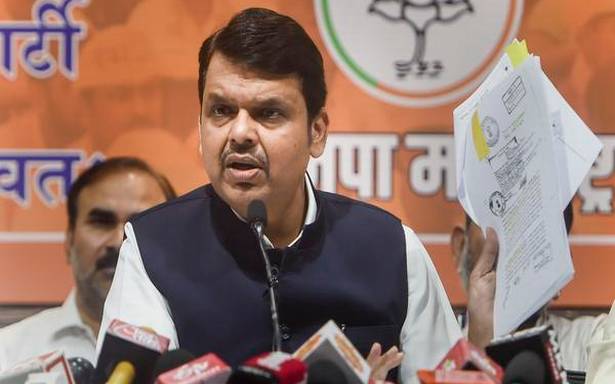 Continuing the ongoing political battle in Maharashtra between BJP leader and Maha Vikas Aghadi (MVA) government in Maharashtra, former Chief Minister and BJP leader Devendra Fadnavis on Tuesday claimed that State minister Nawab Malik has relations with underworld as he purchased land from them during 2003 to 2005.

Mr Malik slammed the former Chief Minister saying he will be exposing the BJP leader on Wednesday for his aid extended to underworld in Mumbai during his tenure.

“Solidus investment is Nawab Malik’s company and land in Kurla was purchased from underworld criminals Sardar Shaha Wali Khan and Mohd Salim Ishaq Patel during 2003 to 2005,” said Mr Fadnavis. Sardar Shah Wali Khan is convicted in 2007 by Tada Court for Life Imprisonment in 1993 Mumbai Bomb Blast. Supreme Court has confirmed the said sentence in 2013. Mohammad Salim Ishaq Patel alias Salim Patel as he’s known — front man of Haseena Parker. He was arrested in 2007 with Haseena Parkar in land grabbing and other fraud issues.

Mr Fadnavis said that three acre land at LBS road got purchased only for ₹20 lakh. “Why did you purchase land from criminals of Mumbai. In such serious matter where underworld, bomb blast convicts have connections with Minister Nawab Malik, I will submit the documents to appropriate agencies for further investigation,” he added.

Replying to Mr Fadnavis, the Minister said that he will be bringing forth the evidence of former CM’s relations with underworld during his tenure and expose how officials were working a don sitting in Dubai.