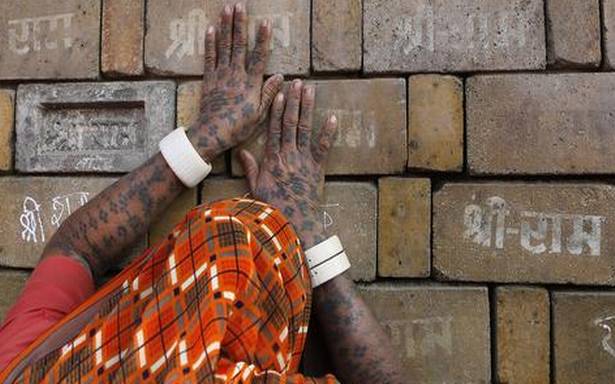 According to the Ram Mandir Trust. from the month of December, the second phase of construction work will begin which includes fixing of stones to create the structure of the upcoming grand temple

The stonework at the Ram Mandir here will start in December, the temple trust said on Monday, June 7, 2021.

On November 9, 2019, the Supreme Court settled the fractious issue going back more than a century and backed the construction of a Ram temple by a trust at the disputed site.

According to the Ram Mandir Trust, filling of foundation will be completed by the end of October and from the month of December, the second phase of construction work will begin which includes fixing of stones to create the structure of the upcoming grand temple.

“In December, the work on base plinth will start with pink stones of Mirzapur and an order has been placed. The stones will be cut and shaped in the premises of Ram Janmabhoomi," Anil Mishra, Trustee of Ram Mandir Trust said.

About 50 layers of 10-inch thick mixture of building material will be laid in about 50-feet deep foundation measuring 400 feet long and 300 feet wide, he said.

Six layers of building material mixture has been placed one on top of the other over the foundation land spread across 2.77 acres, he added.

The construction work is going on round the clock and is being done in two shifts of 12 hours each, Mr. Mishra said, adding about 1.2 lakh cubic meters of debris have been removed from the foundation site.