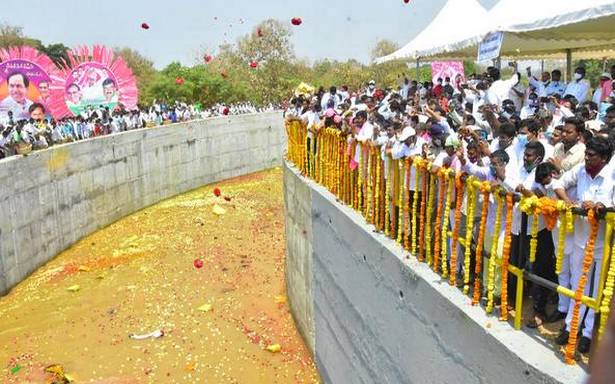 Water through Haldi vagu would also serve the ayacut of Nizamsagar

The life of thousands of farmers will be changed for good in four districts. Facing drought conditions will be history.

The districts that would benefit from Haldi vagu include Siddipet, Medak, Kamareddy and Nizamabad. It is expected that the water would take some 10 days to reach Nizamsagar, the end of point of Godavari water in the district. From Nizamsagar the water would irrigate the some 2 lakh acres ayacut of the project through the existing canal system.

Chief Minister K. Chandrasekhar Rao released Godavari water at 6.125 kilometre point of Sangareddy canal to Haldi Feeder channel. The channel which starts at that point has been designed to carry 1,683 cusecs of water. The water from Haldi Offtake passes through series of four tanks — Bandham Cheruvu, Pedda Cheruvu, Dharmai Cheruvu and Khan Cheruvu — all in Wargal mandal.

Coming to Sangareddy canal, a total of 1,19,106 acres will be provided irrigation from this canal.

“We are happy that we are getting water with the blessings of Chief Minister K. Chandrasekhar Rao. From now on our fields will be a green carpet even in summer. A life time dream has come true for us,” a woman farmer Ch. Santoshamma, who travelled to the venue just to see the Chief Minister, told The Hindu.