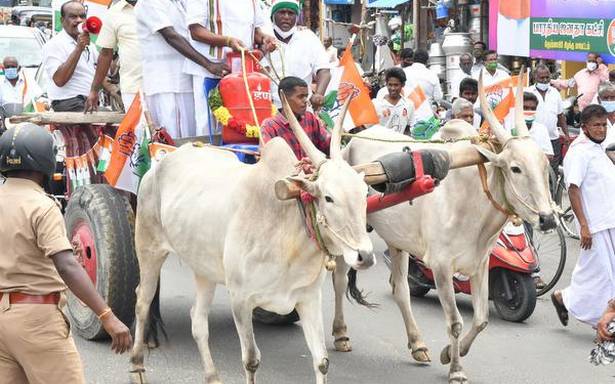 Congress cadre carried out a cycle rally in Krishnagiri condemning the fuel hike by the Union government here on Wednesday.

The protests were led by A. Chellakumar, MP, who rode a bullock cart with a garlanded cylinder as a symbolic act indicating that the fuel price hike had a cascading effect on essential commodities.

According to Krishnagiri MP, the price of cooking gas was ₹184 under the Congress but under the Modi government the price has crossed ₹700.

Later responding to the query on the Karnataka Congress demanding expedited works on Mekadatu project, Dr. Chellakumar said, as far as the Tamil Nadu Congress Committee was concerned, the rights of Tamil Nadu will not be bartered away.

He also alleged that the BJP ruled states are provided with excess vaccination while other states are left in the lurch. “Free vaccines was proposed first by the Congress leader Rahul Gandhi but the Modi government sought to profiteer from the vaccines,” the MP said. Partisan politics will split the country and vaccine partisanship will hurt the common people, Dr. Chellakumar said. “Public sector vaccine manufacturing units should be engaged to augment the vaccine production and break the monopoly given to two companies,” the MP said.