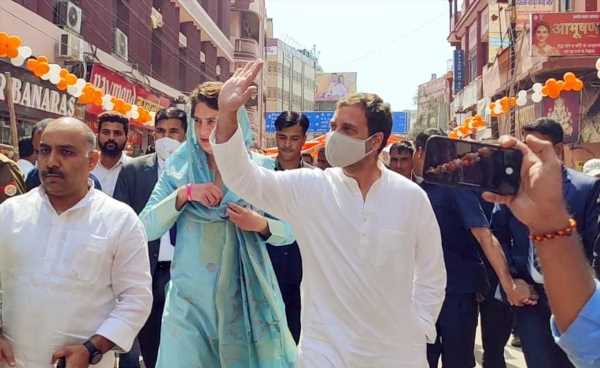 ‘That would be very bad for them and suicidal for both the Gandhis and the Congress party.’

The Congress party was the big loser in the five-state assembly elections results to which were declared on Thursday.

India’s oldest political party could neither hold onto its government in Punjab nor could it dislodge the incumbent in any of the other four states.

If it was bad to be routed by a less than 10-year-old party in Punjab, the story in Uttar Pradesh was worse.

Helmed by party General Secretary Priyanka Gandhi Vadra, the Congress contested all the 403 seats in UP.

While Priyanka proved to a crowd-puller, it didn’t materialise into votes.

The Congress could win only two seats in UP out of 403 — one more than the Bahujan Samaj Party, if it is any consolation.

Talking of the possible dire times ahead for the Gandhis, Rasheed Kidwai, the veteran Congress watcher and author of 24 Akbar Road and Sonia – A Biography,, tells Syed Firdaus Ashraf/Rediff.com, “It is for Sonia to ward it off.”

The first of a two-part interview:

Priyanka Gandhi campaigned actively in UP, but the party’s performance is at its worst historically as it could win only 2 seats out of 403.

As the leader of a political party she will be held responsible for the debacle.

This was an unsurmountable challenge that she had taken on.

She is probably positioning herself for the future, but in politics, the future is no longer a promising prospect.

It is the present that shapes opinions and perceptions on whether a leader is going in the right direction or not.

The future always has uncertainty in politics — like the famous saying goes, a week is too long in politics.

She made an investment in politics for the future, but she was not consistent.

For instance, she spoke of women’s empowerment in politics and identified the westernised concept of pink colour for women. In India this is not (part of) our cultural ethos.

She decided to give 40-50 percent of the seats to women in Uttar Pradesh, but did not give the same number of seats to women in other states. Had she done that, perhaps she would have been seen as a different politician.

She experimented with this in Uttar Pradesh where the Congress was seen as a very lightweight party.

They were fourth in the race after the Bharatiya Janata Party, Samajwadi Party and BSP.

Her case was more for optics.

The BJP too does such optics, but it is backed by ground level forces which they build on (to win elections).

Why could the voters not connect with Priyanka Gandhi?

She drew a lot of crowds as she held 116 meetings between January and February in Uttar Pradesh.

Good crowds did turn up to see her, but it was more out of curiosity.

They wanted to see Indira Gandhi’s granddaughter speaking, just like you would want to see a film actor, a cricketer or a celebrity.

The crowd was surely there for her, but that did not convert into votes.

While voting, people see a lot of things like the party they are voting for, its brand equity and prospects of winning.

In many pockets, the Congress had goodwill in Uttar Pradesh, but that did not convert into votes because the voters did not see them winning the elections.

In such a scenario, people do not want to waste their vote.

Was the sacking of Captain Amarinder Singh as Punjab CM a mistake, considering that the Congress lost the state so badly?

The downfall of Captain Singh is to be seen because he could not win his own seat (from his newly formed party), which proves the Congress right.

However, the method adopted in his exit was wrong and that is the reason I hold Sonia Gandhi responsible.

She has the gravitas of a politician.

She should have called Captain Singh, spoken to him and conveyed to him that he would continue as the leader of the assembly and that towards the end of the assembly session, the Congress would announce a new leader (for assembly polls).

Navjot Singh Sidhu could have become the party president in Punjab.

But what was done was that the Gandhi family were seen as factional leaders of the Congress party.

And the worse thing they did was, they did not put Sidhu’s vision for Punjab into practice.

Now it is argued that the vote in Punjab and the victory of the Aam Aadmi Party was against traditional parties like the Congress, BJP and Akali Dal.

But Sidhu had a new political and social agenda on the table, like his stand on Kartarpur Sahib, drugs and land mafia of Punjab. This was never put in use.

Was it a mistake then by the Gandhis to sideline Sidhu before the elections?

It was a grave mistake of theirs not to bank on Sidhu.

If they had wanted to replace Captain Singh, then they should have done this in a seamless manner by bringing in Sidhu as his successor.

The Congress should have conveyed to Captain Singh that you will have dignity by holding the CM’s post and told Sidhu that you are our future.

The Congress, however, followed the proverbial ‘from frying pan into the fire’.

And they pulled a rabbit out of the hat by making Charanjit Singh Channi the chief minister of Punjab.

They played the Dalit card by doing that, apparently on the advice of senior Congress leader Mallikarjun Kharge.

There was no ground level assessment of Channi, as to what he stands for and what is his locus standi in Punjab.

He was a well-off person and here you are projecting him as a poor person.

The Dalit card was misplaced and the Congress lacked clinical inputs from the ground.

And that is where I think Prashant Kishor’s association would have helped the Congress because he was instrumental in getting Captain Singh re-elected in Punjab in 2017.

The so-called Dalit card by making Channi as CM turned out to be very hollow.

In one of your articles you wrote about Priyanka and Rahul Gandhi, and said ‘tumse naa ho paayega (it is beyond you).

Defeat and victory are very much a part of the electoral process.

What is more important is that the leaders must enjoy respect.

It is not that the BJP did not taste defeat.

The BJP was founded in 1980 and in the first election they faced, after Indira Gandhi’s assassination in 1984, they were reduced to two seats.

So, for 18 years they did not taste power.

The top BJP leadership, in spite of being out of power, enjoyed respect.

My fear is that the Gandhis are losing respect within the Congress party.

That would be very bad for them and, if I may say so, suicidal for both the Gandhis and the Congress party.

I am saying this with a sense of history and as an author who has written books on the Congress party.

P V Narasimha Rao lost the 1996 election, but he also lost the respect of an average Congress person. He was shown the door in a very rude manner.

I recall, there was a Congress Parliamentary Party meeting where Priya Ranjan Dasmunshi and Prithviraj Chavan point blank asked Rao, who was the Congress president, to resign.

This was very humiliating for him.

And when I say ‘Aap se nahi ho paayega‘ to the Gandhis, it was not a loose comment.

Do you think it is possible that the Gandhis will also go the same way as Narasimha Rao?

It is coming. It is for Sonia to ward it off.

Sonia Gandhi was herself witness to the Congress Working Committee meeting in 1998 when Sitaram Kesri was shown the door.

There were reports that Kesri’s dhoti was pulledand Jitendra Prasada got up and told Kesri to leave.