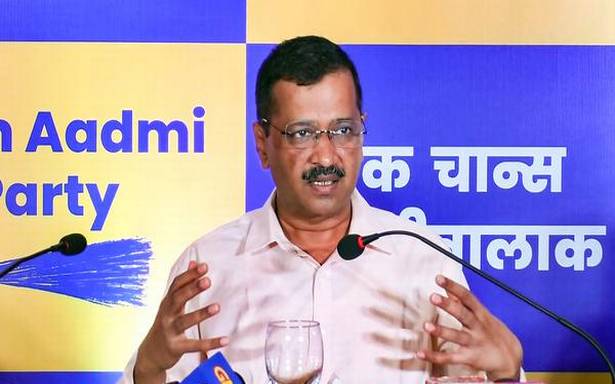 ‘AAP has come forward as a fresh hope for Goans frustrated with politics of the Congress and the BJP,’ says the Delhi Chief Minister

Remarking that the Aam Aadmi Party (AAP) would only think of allying with a non-BJP party in the event of a fractured mandate in Goa, its national convener and Delhi Chief Minister Arvind Kejriwal on Sunday expressed confidence that such a need would not arise and said that his party had come forward as “a fresh hope” for Goans tired of the politics of the older parties in the coastal State.

Mr. Kejriwal also made it clear that the AAP would not be aligning with the Mamata Banerjee-led Trinamool Congress (TMC) in the coming Assembly election of February 14.

The Delhi CM unveiled the AAP’s 13-point ‘vision document’ in Panaji on Sunday with its promises of free electricity, quality education, equality of job opportunity, unemployment allowance, ease of business — all of it topped by an assurance of “honest governance”.

“In the event of a fractured mandate, only then we will think of allying with a non-BJP party. However, while we respect the public’s verdict, I hope this need [of a hung Assembly] does not arise and will not be necessary after the results…the AAP does not understand this politics of ‘make or break’. We only understand how to develop Goa…we leave petty politics to other parties,” Mr. Kejriwal said, speaking to reporters.

Remarking that Goans never had a political alternative until now, the AAP leader said that the AAP had come forward as a fresh hope in Goan politics.

“Till now, it was either the Congress or the BJP. Now, the BJP and the Congress have become one party [alluding to the defection of 10 Congress MLAs into the BJP in 2019]. The BJP and the Maharashtrawadi Gomantak Party [MGP] reigned Goa for 15 years each, and the Congress for 25 years. In all this while, what have these parties done for Goa,” said Mr. Kejriwal, adding that all these parties were responsible for the plight of Goan youth today, coupled with rising unemployment and corruption.

He questioned why anyone among the Goan public would vote for the Congress, given that elected Congress legislators more often switched over to the BJP.

When questioned whether Utpal Parrikar, son of the late Chief Minister Manohar Parrikar, would be taken into the AAP, Mr. Kejriwal said he had great respect for the late Chief Minister and that Mr. Utpal Parrikar was “welcome to join the AAP” if he so wished. The younger Mr. Parrikar has been disgruntled with the current BJP leadership for a while now.

Stating that honesty was in the AAP’s DNA, the Delhi Chief Minister wryly remarked that none other than Prime Minister Narendra Modi had given the AAP its “certificate of honesty”.

“None other than Prime Minister Modi has given the AAP a ‘certificate of honesty’. The PM authorised raids [through Central agencies such as the CBI] on myself and [Delhi’s Deputy Chief Minister] Manish Sisodia…21 AAP MLAs were arrested. A commission was set up to examine 400 files of our government. But not a single mistake emerged,” Mr. Kejriwal said, remarking that the AAP was the “most honest party in India since 1947.”

The party’s 13-point agenda had been prepared through dialogue and discussion with the Goan public for the last one-and-a-half years, the AAP leader alleged that under the current BJP government, there was no equality of opportunity.

The Delhi Chief Minister said that every family in Goa would get a “direct benefit of ₹10 lakh” for the next five years if the AAP was voted to power. “The AAP promises free electricity. If, on an average, every family incurs a power bill of ₹500 a month, this translates into a saving of ₹6,000 annually. Likewise, an unemployment allowance of ₹3,000 per month amounts to a saving of ₹36,000 per year. We have promised an allowance of ₹1,000 per woman in every household, which translates into ₹24,000 if there are two women on an average in each household. We have calculated that the average health and education expenses of children respectively for a family comes to ₹50,000 and ₹72,000. All this adds up to a saving of ₹2 lakh a year for a family and ₹10 lakh for five years of the AAP’s tenure if we come to power,” Mr. Kejriwal said.

Alleging the rampant ‘sale’ in jobs under the Pramod Sawant-led BJP government, the AAP leader said that prize jobs were only being awarded in some constituencies.

“The BJP has been boasting about the proposed Zuari bridge [linking north and south Goa], but let me tell you that in Delhi, the AAP government has made many flyovers in half the cost and time,” Mr. Kejriwal said.