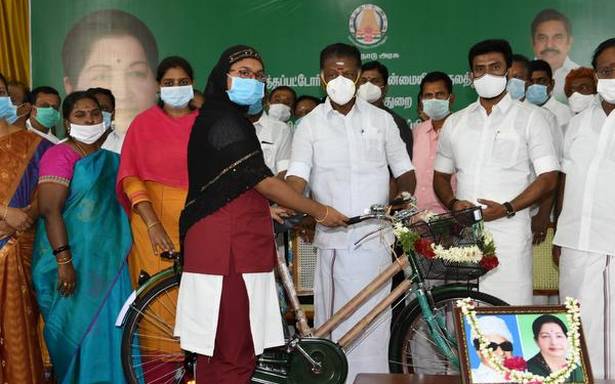 Other important promises that could touch, and likely improve, the lives of millions rarely make headlines

The 17,000-plus word manifesto of the Dravida Munnetra Kazhagam (DMK) is the most detailed. It mentions “welfare” 55 times, followed through with frequent mentions of education/school (61 times), women/girl/female (60 times), and of food/health/nutrition (17 times). The counts of these words in the manifestos of other parties pale in comparison (see table). In the case of the Bharatiya Janata Party (BJP) and the Congress, there is little difference (e.g., education appears 23-24 times; women 14-15 times).

The Makkal Needhi Maiam (MNM), a new party headed by actor Kamal Haasan, made news when it announced a compensation for women’s unpaid, primarily domestic, work. The party has a very lean manifesto (two documents, 2-3 pages each) that barely discusses the topics listed above.

Simple word counts can only tell us so much — filling pages is hardly the point of an election manifesto. Studying them allows us to get a sense of how substantive the promises are and how deep is the understanding of issues. For instance, in the case of the BJP, one of the welfare-related promises is merely that “Adi Dravidar Welfare will be renamed as “Scheduled Caste Welfare Department””. In contrast, in the corresponding section, the DMK includes a promise of reservations in government jobs for Adi-Dravidars, scholarships for girls from certain subgroups, hostel accommodation and food allowance, and so on. The manifesto also clarifies which promises apply to children born of inter-caste marriages.

Interestingly, the BJP promises to transfer panchami land to Dalits. Dalit/land activists have questioned the promise because a BJP leader from Tamil Nadu, as Vice Chairperson of the National Commission for Scheduled Castes, had ignored petitions to the Commission on precisely this issue. With this promise, apart from wooing Dalit voters, the BJP is probably trying to keep alive an allegation — denied by the DMK — that the DMK’s Murasoli office is on panchami land.

As a development economist working on social policy, Tamil Nadu is of great interest. From school meals, canteens (or community kitchens) and maternity entitlements,it has pioneered some of the best welfare programmes.

Following in that tradition, the DMK has the most comprehensive, if modest, vision for a welfare state (in its manifesto): 150 days of National Rural Employment Guarantee Act (NREGA) work instead of just 100 per year per family and a fair wage (₹300 per day). Reintroduction of urad dal in the Public Distribution System has been promised. For children’s nutrition, it propose to add milk in school meals; Tamil Nadu already serves eggs every day. Running a programme well, requires decent work conditions for staff; the DMK promises pensions and gratuity for anganwadi and mid-day meal workers.

For women, among the most significant promises is one to increase maternity entitlements under the Dr. Muthulakshmi Reddy scheme, from ₹18,000 to ₹24,000 per child. In State government jobs, the party proposes to increase paid maternity leave from nine to 12 months. Besides this, it promises to set up nursing stations with privacy. Exclusive breastfeeding for the first six months is among the most important needs of a child. In a society where women are not to be confined to their homes because they bear the main responsibility of child rearing, the promise of nursing stations is not trivial. There is also a proposal to set up 500 new Kalaignar canteens (modelled on Amma’s canteens, pioneered by former Chief Minister and AIADMK leader J. Jayalalithaa).

The Congress manifesto does not mention NREGA — an Act that was passed by its own government under the United Progressive Alliance-1; and as far as the PDS is concerned, that section in the manifesto is populated with three seemingly random points: “steps will be taken <to provide free rice; along with free rice>, lentils, cooking oil and other essential groceries” (emphasis added). (To be fair, the English version of the Congress manifesto is an abridged version of the Tamil manifesto; however, it does come across as a hastily “Google translated” document.)

This is not to say that all manifesto promises are laudable. Just to give one example: as in Haryana’s widely criticised, possibly unconstitutional move to reserve jobs for locals,the “DMK assures to introduce legislation to reserve 75 percent of private sector jobs for locals.” It is a misguided, impractical promise that could lead to corruption and red tape without any substantive gains.

The DMK manifesto also betrays how deeply ingrained inequality is in our society. It promises an enhanced compensation of ₹24,000 for women as maternity entitlement in the unorganis̥ed sector. This will still not bring their entitlements on a par with those of women in, say, government jobs, who are entitled to 26 weeks paid leave under the Maternity Benefit (Amendment) Act 2017 (and who are being promised 12 months by the DMK). While the first is necessary, the second will increase inequality. Finally, there are glaring blindspots: apart from ignoring health care in a pandemic year, the insidious use of Aadhaar in welfare and beyond has not been opposed.

The main reason for dwelling on the details of the manifestos is that the mainstream English media rarely goes beyond the ‘freebies’ narrative: free washing machines, “free data”, etc. In earlier elections, free rice, fans and mixer-grinders made news. Other important promises that could touch, and likely improve, the lives of millions rarely make headlines. For instance, given the nationwide farmer protests, the proposals on agriculture in the DMK manifesto should have been debated. Among other promises, it includes the promotion of cooperatives for fairer marketing mechanisms. Similarly, it mentions jobs/employment more often (66 times) than welfare (55), but we have not heard what these promises are. An assurance to redress these problems is at least a recognition the problem exists.

The argument here is not that merely making progressive promises will ensure their implementation, nor is the idea to create an impression that politics in Tamil Nadu is people-centred or clean. The concern is that by allowing ourselves to be drowned in the freebies narrative, we are giving political parties a free pass at a crucial juncture.