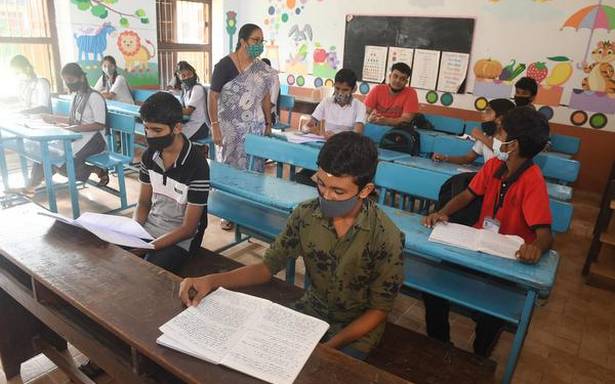 Many schools had decked up the classrooms to welcome students

Students turned up in good numbers to attend physical classes on the first day of offline classes for high schools and even semesters of degree courses under Mangalore University, in Dakshina Kannada on Friday.

Many schools had decked up the classrooms to welcome students. The Rosario High School teaching staff had placed welcome arch through which students entered. After being received by the teachers, students proceeded to their classrooms after mandatory thermal scanning.

Principals of Rosario High School and Gonzaga School Aloysius D’Souza and Melwyn Lobo said parents favoured offline classes and there were no diffidence in them to send their wards for offline classes.

Secondary school teachers largely had general discussion with their students and let the latter to acclimatise them with the classroom environment. Aruna Kumari C., headmistress of the Canara High School, Dongarkery, said teachers were involved in checking assignments and project works. Arun Prasad Rai from Cascia High School said teachers had discussion with students about the way they are spending time in their houses. Taranath Kairangala from Government Secondary School at Manchi in Bantwal taluk said students were involved in different art works.

U. Rajeshwari, the in-charge headmistress of Government Secondary School, Bolar, said that staying away from offline classes for nearly two years had brought down the learning level of students to a great extent.

“We have planned activities related to basics of language, science, and mathematics. It will take some time to bring them to the secondary class level,” she said. Meanwhile, government schools were continuing to admit students to classes VIII to X till October, she added.

A total of 11,218 students, including 119 from Kasaragod district of Kerala, attended classes for the first pre-university on the second day of reopening of physical classes for them on Friday. Deputy Director of Pre-University Department Jayanna said those from Kasaragod were allowed after checking their COVID-19 negative certificates.