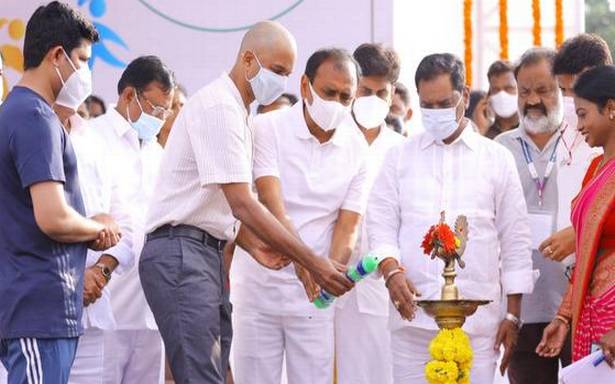 The five-day All India Invitation Kabaddi Tournament for Men and Women was formally inaugurated by badminton star Pullela Gopichand here on Wednesday.

Sporting a new look with a shaven head after visiting Tirumala, the star sportsperson lighted the traditional lamp, released pigeons and balloons into the air along with the Deputy Chief Minister K. Narayanaswamy, MLA B. Karunakar Reddy and Mayor R. Sireesha to kickstart the sports event.

Member of Parliament M. Gurumoorthy announced that he was in the process of identifying a five-acre site to be allotted to ace shuttler Kidambi Srikanth for setting up a badminton academy in Tirupati, as offered by the State government.

Mr. Karunakar Reddy hoped that the event would lead to revival of interest on rural games and sports, besides making the youth evince interest on physical fitness.

‘Indira Maidanam’ located at the heart of the city resembled a beehive of activity, with thousands of sports enthusiasts thronging the sports venue to take a glimpse of the games lined up for five days.