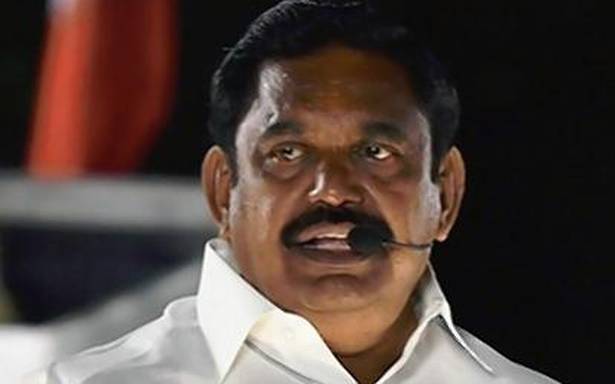 The Leader of the Opposition said there were long queues seen at crematoriums but the reported figures were low; he also denied charges that the AIADMK government had failed to control the spread of the virus

Leader of the Opposition Edappadi K. Palaniswami on Friday charged that the State government was under-reporting deaths due to COVID-19 and said that the public would become aware of this only if transparent data was provided.

Mr. Palaniswami said: “The government is under-reporting deaths. Long queues are seen at crematoriums for conducting cremations but figures reported in the news and media are low. This data should be transparent, only then the public would become aware. When deaths are under-reported, the relatives of the deceased take the bodies to their homes and the body is kept for display for several hours and rites are performed. This is causing the spread of the disease.”

He added that government should appoint sufficient number of workers in crematoriums for conducting the funerals, as relatives are forced to wait for several hours for the cremation of COVID-19 patients.

Mr. Palaniswami said that patients dying while waiting in ambulances at hospitals must be tested for COVID-19 and if they test positive, their bodies should be safely packed before handing them over to relatives. While he was Chief Minister, the cremation of COVID-19 patients was done through local body workers, he said.

Mr. Palaniswami said that the disease is fast spreading in villages and 17 persons contracted the disease in his village on Friday alone. Criticising the relaxations and operation of buses ahead of the stringent lockdown recently, he said that about 6 lakh persons returned to their villages from cities and they were not tested for COVID-19. During his regime, village officers would take people coming from other places for tests and those who tested negative were dropped back at their houses this prevented the spread of the virus in villages. He added that intensive contact tracing was done then, and it prevented the spread of COVID-19.

Mr. Palaniswami said that the State government should follow measures taken by the AIADMK government. It should conduct fever camps and increase test and testing centres. He said that the government, on a war-footing, should appoint sufficient number of healthcare workers. He added that existing doctors have been working continuously without rest.

Mr. Palaniswami denied charges by Medical and Family Welfare Minister Ma.Subramanian, that the erstwhile AIADMK government failed to contain spread of the disease Mr. Palaniswami said that highest number of cases reported in June was 6,900 cases and due to the then government’s efforts, daily cases gradually reduced and on February 26, only 481 cases were reported.

He added that since the poll model code of conduct came into effect they couldn’t contact officials. Mr. Palaniswami said that when the case load increased after 10 days, he contacted the Chief Secretary to organise a meeting of district collectors and medical experts. He wrote to the Election Commission of India requesting permission to conduct the meeting but they said the Chief Secretary would conduct the meeting with Collectors and medical experts.

Mr. Palaniswami said that health secretary J. Radhakrishnan has clarified on charges by the Medical Minister regarding vaccine wastage during their regime. He charged that comments by Chief Minister M.K. Stalin while he was Opposition leader slowed down the vaccination drive. He added that there was sufficient stock of vaccines then and the vaccine was administered through PHCs and government hospitals.

Mr. Palaniswami appealed to the State government to provide necessary relief to farmers affected due to rains caused by the Yaas cyclone in Kanniyakumari. Mr. Palaniswami said that all oxygen beds in the district were full. He said that the government should provide sufficient oxygen for government and private hospitals. He added that while there are only 3,800 beds in COVID-19 care centres, the government has claimed that 11,500 beds are available in the district. He added that the district collector should inform about bed availability in CCCs and hospitals so that people could approach those facilities directly for treatment.

Mr. Palaniswami said that they were not “doing politics” and he was of the view that comments should be made only after 100 days of the new government but was forced to make these comments due to the COVID-19 pandemic and charges levelled against their regime.