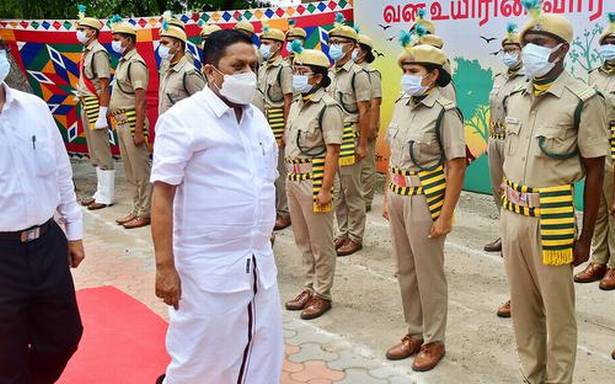 337 people have been killed by wild animals in five years: Forest Minister

The Tamil Nadu government has come up with a compensation package for farmers affected by wild animals. Forest Minister K. Ramachandran told The Hindu on Friday that a government order was ready to award compensation to people whose applications for the relief were pending for long.

According to the Minister, 2,901 applications were pending, a majority of which were not cleared by the AIADMK government. A sum of ₹5.68 crore was required to pay compensation to the affected people.

The Minister said 337 people had lost their lives in attacks by wild animals in the last five years in the State. “The AIADMK government did not give full compensation for many of these deaths…No application for solatium [for deaths] is pending after the DMK came to power.”

Addressing Forest Department staff and various stakeholders at the concluding ceremony of the Wildlife Week celebrations at the Tamil Nadu Forest Academy in Coimbatore, he said the DMK government was determined to prevent incidents of human-animal interactions.

The Minister pointed out that wild animals would not stray if the forests were healthy. The Forest Department found that the natural vegetation in forests had been affected by invasive plants which were introduced by the Westerners. To address the issue, it would launch a project this year for the rejuvenation of forests by removing invasive plants. Native plant species would be reintroduced.

He stressed that forest protection was essential to handle issues like human-animal interactions and ozone depletion. “If we protect forests, they will naturally stabilise the environment… The government is on a mission to increase the forest cover from 23.98% to 33% in the next 10 years.” To tackle human-animal interactions, the Forest Department had increased the strength of frontline staff, he said. It would also revive the village forest committees as they would get early information on wild animals straying from forests.