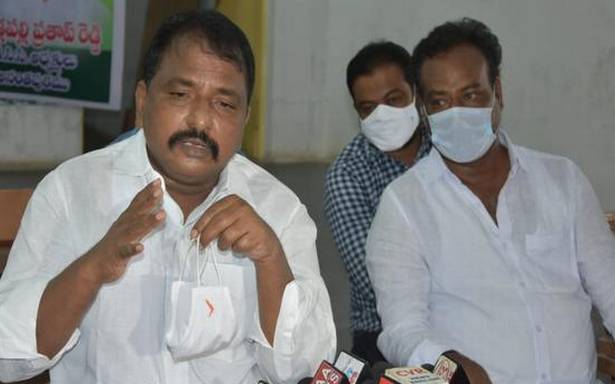 ‘It is borrowing and selling public properties to repay loans’

Chief Minister Y.S. Jagan Mohan Reddy is cheating people in the name of development, and the government is robbing the State and its people of their natural resources such as bauxite in the name of laterite mining, APCC president S. Sailajanath has alleged.

“For securing a small amount of loan, the State is agreeing to all the conditions being put by the Centre. It is imposing a tax on garbage collection and enhancing property tax too,” Dr. Sailajanath said while addressing the media here on Sunday.

“The assets of Andhra Pradesh in Telangana had been gifted away to the neighbouring State after bifurcation. Mr. Jagan Mohan Reddy, instead of raising the issue, says we are friendly States,” he observed.

Referring to the dispute over sharing of the Krishna waters, the APCC chief said, “Why can’t Mr. Jagan Mohan Reddy put his foot down and speak with his Telangana counterpart and stop the neighbouring State from robbing the precious water on which the Rayalaseema region has a right?”

“How long will the government survive by borrowing and not invest anything on revenue-generating projects? The government is obtaining loans to repay loans. Besides, it is selling government lands and assets to repay some of the loans,” Dr. Sailajanath said.

“Why is the Chief Minister not raising his voice on what is due to us from the Centre? Why doesn’t he reduce the sales tax to lower the fuel prices in the State?” he questioned.

Asking the Chief Minister as to what was his contribution to the State’s development, Dr. Sailajanath said, “Farmers have been left to the vagaries of nature and input subsidy due to them has not been released.”

He also termed the job calendar “a big bluff.” The government had taken away the signature power of the sarpanches, he alleged. “The power guaranteed under 73rd and 74th amendments to the sarpanches has been handed over to the village secretariat staff and volunteers, who do not have the constitutional authority,” he said.

The Chief Minister had promised 2.5 lakh jobs before coming to power, but did not fill the government vacancies later.

“Let him fill all the vacancies as part of the job calendar as none of these posts figure in it,” Dr. Sailajanath said.