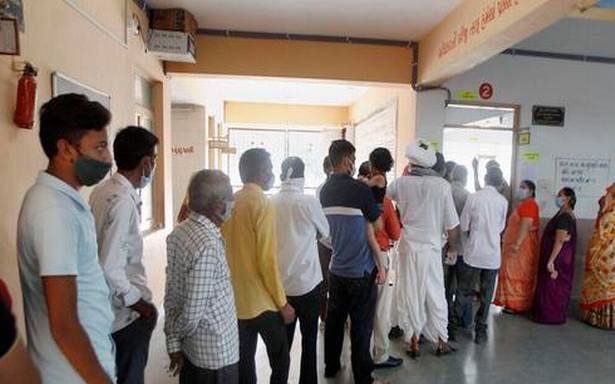 During the first two hours of counting which began at 9 a.m., the BJP won 16 seats in the Gandhinagar Municipal Corporation

The BJP took a lead on Tuesday in the initial hours of counting of votes for elections to the Gandhinagar Municipal Corporation (GMC) and three other municipalities in Gujarat.

In the Gandhinagar civic body, the ruling BJP has so far won 16 out of total 44 seats of 11 wards, election officials said, adding that the Congress registered victory in one seat while AAP is yet to open its account.

Okha and Bhanvad are located in Devbhumi-Dwarka district, and Thara is in Banaskantha district.

Voting for elections to the GMC and the three other municipalities took place on Sunday. Besides, bypolls to elect representatives on 104 vacant seats of various other local bodies were also held the same day.

Of the total 2.8 lakh registered voters in Gandhinagar, 56.24% had exercised their franchise.

In Gandhinagar, the Aam Aadmi Party (AAP) had put in a concerted effort apart from traditional rivals BJP and Congress.

A total of 161 candidates contested the GMC poll, with the BJP and Congress fighting in all 44 seats and the AAP in 40 seats.

In the 2016 GMC elections, both the Congress and BJP won 16 seats each out of the total 32 seats existing at that time.

Both the parties then had equal chances of forming the board through a draw of lots. However, at the last moment, Congress corporator Pravin Patel switched sides and helped the BJP come to power in the civic body.

The latest election was originally supposed to be held in April this year, but it was postponed in view of the high number of COVID-19 cases emerging every day at that time.

The GMC poll is being seen as a litmus test for the BJP in the backdrop of its sudden and surprising decision to change the State’s Chief Minister and the entire cabinet recently. The party had registered a thumping win in the local bodies polls held in February this year.

The state Assembly polls are due next year.