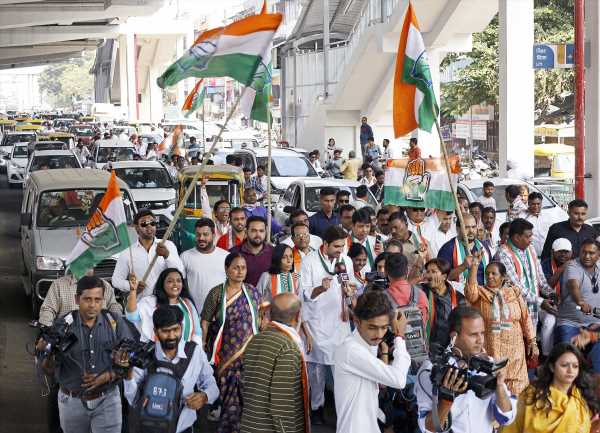 Competition to bag Muslim votes seems to be getting fiercer in the upcoming Gujarat assembly elections as the minority community now has several “secular” parties to choose from and vote for in the Bharatiya Janata Party-ruled state.

In earlier elections, the Congress was considered the only major contender for Muslim votes in Gujarat, but this time the main opposition party is facing stiff competition from smaller outfits to get minority electors on its side.

The grand old party is facing competition from Hyderabad-headquartered All India Majlis-E-Ittehadul Muslimeen, Arvind Kejriwal-led Aam Aadmi Party and some other parties for support in polls from this section of the society.

In the 2017 elections, just three Muslim MLAs, all from the Congress party, had won. The number, however, was better than 2012 when there were just two MLAs.

In the overall state population of 6.5 crore, Muslims account for roughly 11 per cent and have a sizeable presence in around 25 assembly seats.

The BJP, which has been ruling the state for more than two decades now, is not seen as a viable option for Muslim voters which have a sizeable presence in over two dozen seats in the 182-member state assembly.

Earlier this year, the Congress appointed its Wankaner MLA Mohammad Pirzzada as the working president of the party, in an attempt to woo the minority community votes.

State Congress president Jagdish Thakor, in a bid to ensure the Muslim votes stay with the party, repeated a 2006 statement of then-Prime Minister Manmohan Singh, who had said minorities must have the “first claim” on resources of the country.

Thakor’s remark in July triggered a backlash from right-wing outfits that accused him of indulging in appeasement politics for votes.

AIMIM head and Lok Sabha MP Assadudin Owaisi has frequently visited Gujarat to garner Muslim votes. His party had said that it will fight 30 seats in Gujarat and has already declared six candidates.

The AAP is working silently to woo the community. It had recently organised a road-show of Punjab Chief Minister Bhagwant Mann in the minority-dominated Dariapur area.

The AAP has so far declared three Muslim candidates.

“Till the last elections (held in 2017), Muslims did not have a choice as in Gujarat the fight has been between two parties (Congress and BJP). But now, more political parties have come here for the 2022 elections. Multi-cornered electoral contest is a good thing in a democracy,” said Mujahid Nafees, convener, minority coordination committee, a non-political organisation.