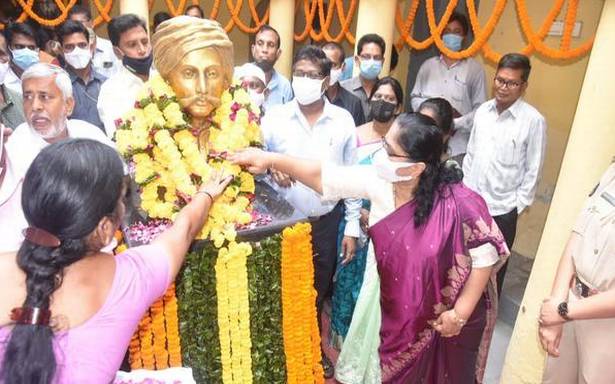 She asks teachers to display his messages prominently in schools

Noted playwright, poet and writer Gurajada Apparao will continue to inspire youngsters as his works are relevant for all generations, according to District Collector A. Suryakumari.

Ms. Suryakumari was speaking after paying floral tributes to Mahakavi Gurajada on the occasion of his 159th birth anniversary, at his house here on Tuesday.

Calling upon the teachers to display his messages such as ‘Desamante matti kadoy… desamante manushuloy’ prominently in all schools and colleges, she promised to take steps to highlight them in all village and ward secretariats.

MLA Kolagatla Veerabhadra Swamy and MLC Penumatsa Sureshbabu said the government was taking steps to convert the house of the poet into a museum.

Gurajada Samskritika Samakhya general secretary K. Prakash and others participated in the procession taken out on the occasion from Gurajada’s house to Gurajada Circle.