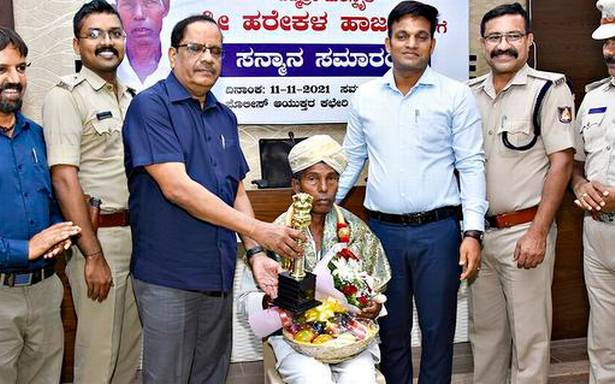 As white shirt and white dhoti clad Harekala Hajabba entered the conference hall of the Police Commissioner’s office, all police personnel present stood up to clap and welcome him on stage. They did the same when he was honoured by Police Commissioner N. Shashi Kumar and retired Inspector-General of Police Gopal B. Hosur here on Thursday.

On November 8, the elderly orange seller Hajabba, who worked towards building a government school in his village, received the Padma Shri Award from President Ram Nath Kovind. “I never imagined that a poor man like me will be called to New Delhi and honoured by the President. I will remember this for my lifetime,” said a humble Mr. Hajabba and remembered all those who donated generously for realising his dream of having a government school in his village.

“Bureaucrats supported me and so have elected representatives. Media persons highlighted my work. I am really indebted for all the support and honour bestowed on me,” he said.

Mr. Hosur urged police officers to stand by the voiceless who come to the police station for justice. “Give preference to the poor and the downtrodden. Bureaucrats have the power to help people in need,” he said.

Mr. Kumar said that with selfless people like Mr. Hajabba receiving the award, the value of Padma awards has increased. Mr. Hajabba has inspired police personnel to serve society in a selfless way.