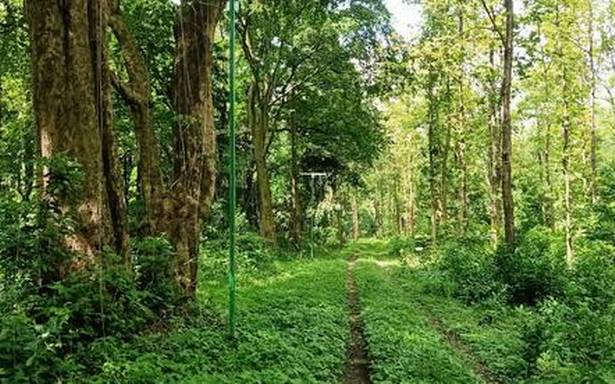 A proposal to replace the fixed lines with the hanging ones to secure the human habitations and farmlands was included in the draft master plan prepared in the State to address the issue of human-animal conflict.

The Hanging Solar Power Fence will be installed on pillars of height ranging from 15 ft to 20 ft and stainless steel wires, which are connected to a power supply point, will be hung from the main line. Each pillar will be erected at a distance of 15 ft. The hanging wires will not touch the ground and there will be a gap of around one feet between the ground and the wires. The wires will be arranged such that small animals could freely and safely move under them, according to the proposal.

After wild boar, the elephant is one wild species that often comes into conflict with humans. Farmers have also been complaining about the crop raid and other damage caused by marauding elephant herds. Each year, the State government shells out a significant amount as compensation for those whose crops and properties are damaged by the wild elephants.

One of the disadvantages of the fixed solar power fences is that elephants could easily destroy them by forcing trees on them. The animals were often seen walking across the damaged power lines. The fixed fences also prevent small animals from moving through the area. Such issues will be addressed in the hanging fence, the officials say.

The State may have to put such a fence at a distance of 685km, considering the issue of human-elephant conflict.

The mild electric shock will prevent the foray of the animals that come into contact with the wire. The electric shock will be of mild intensity and will cause no harm to the animals. Such hanging fences could be employed across the forest fringes to prevent the entry of elephants from the woods to human habitations. Hanging fences will be effective in marshy and high conflict zones, the officials hope.

The hanging fences were successfully tried in the neighbouring States of Karnataka and Tamil Nadu, according to the master plan document.