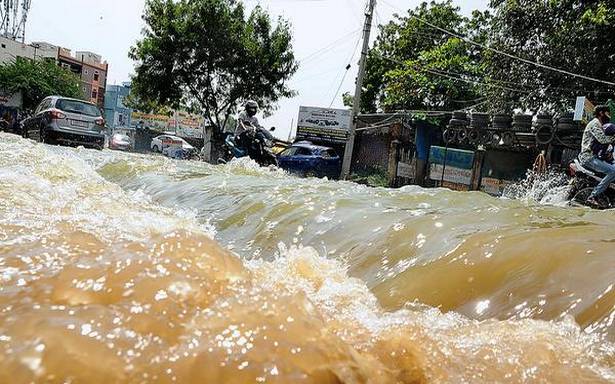 The horror of torrential downpour revisited the city on Saturday, causing flooding and traffic jams as usual. Starting after 4 p.m., heavy rain continuously lashed the city for about an hour, creating mayhem on roads.

Several areas reported deafening thunderbolts accompanied by lightning to add to the fury. Secunderabad received the highest rainfall at close to 10 cm, followed by Begumpet at about 9 cm at 7 p.m.

Eight flood gates of Himayatsagar and four of Osmansagar were lifted to release surplus water into Musi river.

Chandan Cheruvu of Jillelaguda overflowed with surplus flows flooding the main road. All the surrounding colonies had their streets drowned, at times in chest deep water.

Kodandaram Nagar, downstream of Saroornagar lake, had swirling flows from the lake, and together with the sewage overflow, gave a repeat nightmare to the residents. Several localities in the eastern city such as Hayatnagar, Champapet, Vanasthalipuram, Panama Godowns, among others, experienced severe flooding.

A person had a miraculous escape at Chintalkunta when his bike skidded into an open manhole and he was washed away with the flood water till he managed to climb up the next manhole. About 150 families were shifted to safer location when Lambadi Tanda Colony of Hayatnagar was submerged.

Close to 40 two-wheelers were crushed when compound wall of the Asian Shiva-Ganga theatre complex in Gaddiannaram collapsed.