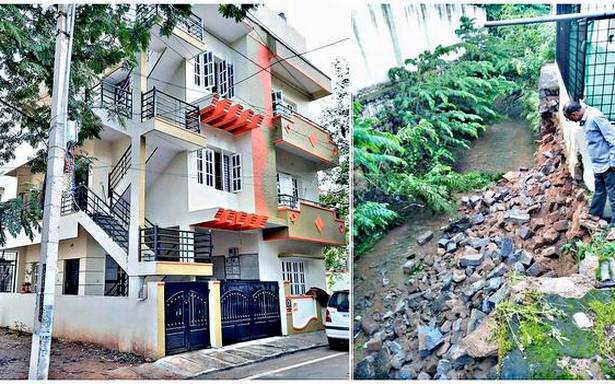 A retaining wall of a stormwater drain at Nagarbhavi 2nd Stage, Papareddypalya, collapsed on Sunday following yet another day of heavy rain. As a result, the compound wall of a two-storey house adjoining the wall also collapsed.

While civic officials claim that there is no immediate damage to the two-storey structure, they want to issue a notice to the building owner. The jurisdictional official told The Hindu that the building owner had been asked, albeit orally, to find alternate housing arrangements until the building was deemed safe.

“When we informed the owner that the building may not be safe and that a notice would be issued, he refuted the charges and said he would complain against the BBMP. He also demanded that we provide alternate arrangements. However, this may be possible only after ascertaining if the 10-year-old building has been constructed as per the approved building plan,” the official stated.

An engineer from the Stormwater Drain Department pointed out that the drain’s retaining wall is a free-standing gravity wall. It is a stone masonry construction which cannot not sustain any ‘earth or building pressure’. “It was constructed more than 30 years ago, when the area was still under the city municipal council. The building has been constructed in the buffer zone. To arrest further damage, we are placing around 50 sand bags in the area,” the engineer said.

Building owner Krishna P., a bank employee, claimed that the drain collapsed as a result of faulty work.

“The house has been constructed on a BDA allotted site. The drain is just a rainwater drain and not a rajakaluve as is being claimed by the BBMP. If it was a rajakaluve, would the BDA have allotted the site?” he sought to know.

He blamed the civic body for not maintaining the retaining wall, and stated that another portion of the wall adjoining a vacant site in the locality had also collapsed. “The BBMP should make other arrangements for us, if they are going to issue a notice,” he said.