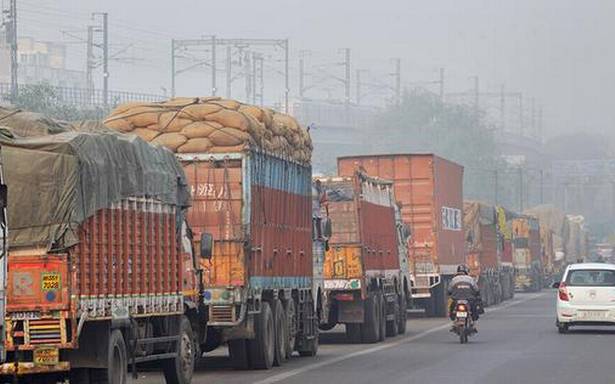 Even as heavy vehicles, except those carrying essential items, have been barred from entering Delhi till November 21, the Transport Department on Wednesday issued a public notice asking private transport operators to offer their vehicles for hire to the Government.

The Government plans to induct 1,000 private buses for one month so that more people turn to public transport for daily commute instead of using their personal vehicles, which will help control the rising pollution.

While the order banning the entry of heavy vehicles — in compliance with a directive by the Commission of Air Quality Management — was issued on Wednesday evening, the public notice will be published on Thursday.

The order, however, will not apply to vehicles carrying raw vegetables, fruits, grains, milk, egg and ice and tankers carrying petroleum products.

Meanwhile, the Transport Department said that only 10% of the city’s 1.30 crore vehicles are plying without the pollution under control (PUC) certificate following enforcement drives which began in October.

Ashish Kundra, secretary-cum-commissioner, Transport, said, “We sent 30 lakh reminders to vehicle owners to get the PUC certificate renewed if it had expired. Besides, enforcement teams have been deployed at fuel stations in the city to check the certificate.”

Not having a valid PUC certificate attracts a fine of ₹10,000 or six months’ imprisonment or both.