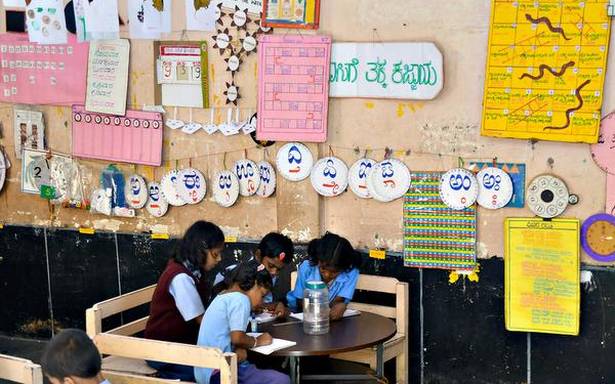 On the occasion of Kannada Rajyotsava, a look at the best way to tap into the cultural power of a language

Around six years ago, Manjula Rambabu, a dentist by profession, relocated from the United States to Bengaluru. Her son had to start learning Kannada as a language in a CBSE school. As Dr. Rambabu’s mother tongue was Telugu, she too began learning Kannada with her son. “Although my son had to learn two new languages, Hindi and Kannada, he was able to pick up Kannada more easily,” she said. With the steady support and encouragement of his teachers, Dr. Rambabu and her son grew to love the language as they found lessons, stories, and themes relevant to their daily lives.

In many ways, her experience with learning Kannada is different from that of many parents and children who say they are struggling with it.

The cultural power of a language can help bridge the gap between different communities. While most people believe that it is important to know the language of one’s environment, and that it’s best to initiate a child when young, execution remains a problem. Ways to integrate a language into the school curriculum is a long-debated issue, one that has no easy answers.

Dr. Rambabu says that parents also need to get involved to help ensure that learning is a smooth and stress-free process. “My son had a lesson on Mysuru. Before the lesson was taught to him in class, we went to Mysuru and learned about its history and the culture,” she said.

But it’s not easy to learn a new language, especially when parents know that they may be transferred to another State. A section of parents were up in arms with school managements when Kannada as a language was made mandatory.

However, teachers point out that rather than forcing the issue, they have persuaded parents to understand how knowing conversational Kannada would help them in their day-to-day tasks. Many teachers put in extra effort by way of organising remedial lessons, assignments, and projects to make the learning curve smooth. Others have roped in parents who are also learning the language along with their children.

Srinivas M.C., head of the Kannada Department, Delhi Public School, Bengaluru East, said at several open house events, teachers have persuaded many parents on how learning Kannada would help them. “We initially had a small set of parents who had migrated from other States who said that it would be difficult for their children to learn the language. We convinced them that we would help their children every step of the way. We also told them that their children would find it easy to communicate with more people and ensure that they are not alienated,” he said. Currently, the school teaches Kannada as the second language for students of classes one to five.

While the Karnataka government brought out the Kannada Language Learning Act in 2015 that made it mandatory for schools to teach Kannada as the first or second language from class one onwards. However, T.S. Nagabharana, chairman, Kannada Development Authority (KDA), said it was, however, not implemented strictly. “Many schools are waking up to this rule now but there is a need to be firm and ensure that schools respect the law of the land,” he said.

Ashwini Shetty, Kannada teacher for primary classes at Harvest International School, said they decided to engage with both children and parents. “Children are more open to learning new things or a language. So we used to teach children two new words a day and ask them to teach their parents how the word could be used in conversational Kannada. The moment they realised there was value for them, parents stopped complaining. Once we engaged with children and involved them in activities and cultural programmes, all these concerns faded,” she said.