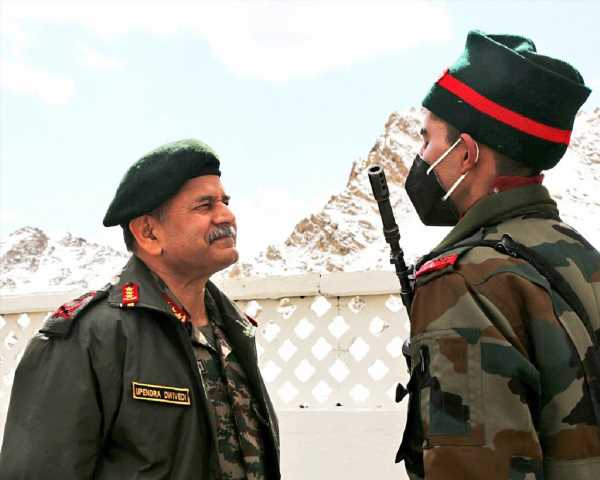 Northern Army Commander Lt General Upendra Dwivedi on Wednesday said that the actions by People’s Liberation Army along the Line of Actual Control gave the Indian forces an opportunity to build their capacities, asserting that a high standard of operational preparedness needs to be maintained at all times along the border in Ladakh.

Lt Gen Dwivedi, who was referring to the clash between the Indian soldiers and Chinese troops in the Galwan Valley in June 2020, also said that PLA’s aggression in eastern Ladakh was met with “swift mobilisation and appropriate force posturing”.

“Given the nature of challenges faced by Northern Command, a high standard of operational preparedness needs to be maintained at all times (along LAC in eastern Ladakh),” Lt Gen Dwivedi said in an interview to PTI in Udhampur.

He said that the Army is looking at enhancing its technological threshold in different areas of operational preparedness.

“To sustain these levels of preparedness, we are looking at ‘Atmanirbharta’ or self-reliance to provide the solutions,” he said.

The border row between India and China erupted in May 2020 and the stand-off escalated on June 15, when troops from the two sides clashed in Galwan Valley near Patrol Point 14.

The Army commander saw an opportunity in this aggression to buildup capacities and boost up defence preparedness along LAC.

“While the actions by PLA created an adverse situation temporarily, we took it as an opportunity to build our capacities, review our plans in light of the new realities about how PLA treats the LAC, enhanced our mobilisation capacities, boosted our defence preparedness and brought about a shift in the overall response dynamics,” the GOC-in-C said.

“Despite existing agreements and protocols, PLA’s aggression in Eastern Ladakh and attempt to surprise us were met with swift mobilization and appropriate force posturing, duly synergised with the other two Services,” he said.

“Our speedy buildup of military infrastructure and logistics, indomitable spirit of our soldiers and astute leadership of commanders at all levels are of very high standards”, he said, adding all this together has exemplified Indian Army as a powerful and modern military.