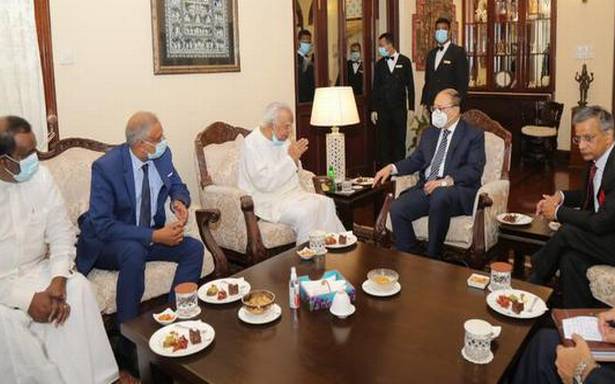 India has urged Sri Lanka to hold elections to its provincial councils without further delay, according to the Tamil National Alliance (TNA) whose delegation met visiting Foreign Secretary Harsh Vardhan Shringla on Monday.

India also said it does not appreciate any “third party presence” in the Tamil-majority north and east, where New Delhi has “invested heavily”, the Foreign Secretary told the TNA, which is the largest grouping representing Tamils of the north and east in the 225-member Parliament, with 10 MPs.

“Foreign Secretary Shringla told us that he has conveyed to the Sri Lankan leadership that provincial polls be held immediately, along with the full implementation of the 13th Amendment,” TNA spokesman and Jaffna legislator M.A. Sumanthiran, who was part of the delegation led by veteran Tamil leader R. Sampanthan, told The Hindu.

“The government had raised some legal challenges in holding the elections, but I pointed out to the Foreign Secretary that even the Attorney General had cleared the holding of polls with a simple amendment,” Mr. Sumanthiran, a senior constitutional lawyer, said.

“The Foreign Secretary reiterated India’s continued support for the full implementation of the 13th Amendment and going beyond it to achieve meaningful devolution,” the Tamil MP said, referring to the only constitutional guarantee thus far on a measure of power devolution to the provinces. Key members within the Rajapaksa government have sought the repeal of the Amendment, and the abolition of the provincial council system.

The five-year terms of the provincial councils — born out of the Indo-Lanka Accord of 1987 as a step to devolve political power to all the provinces — last expired in 2018 and 2019, during the time of the former Maithripala Sirisena–Ranil Wickremesinghe government. Despite the then oppositional Rajapaksa camp demanding that the polls be held to the nine provinces, the Sirisena administration, which amended the Provincial Councils Elections Act in 2017, postponed holding the elections, as it grew increasingly unpopular amid internal rifts.

Earlier this year, the TNA opposed a Chinese energy project in Delft island off Jaffna peninsula, citing “security threats” to the Tamil people and India. New Delhi too voiced concern and offered an alternative grant to Colombo to pursue the project.

In his delegation’s meeting, TPA Leader and MP Mano Ganesan underscored the importance of the 16th Amendment, along with the 13th Amendment, that ensures language rights to Tamils. “We urged India to give equal importance to both while raising our concerns with the government,” Mr. Ganesan told The Hindu.

The TPA flagged proposed electoral reforms that they fear would reduce the political representation of the Malaiyaha Tamils [some of whom identify as Indian origin Tamils]. “We also sought greater support of the Indian government to the plantation Tamil community that has been neglected for generations, through suitable socio-economic projects,” he said.