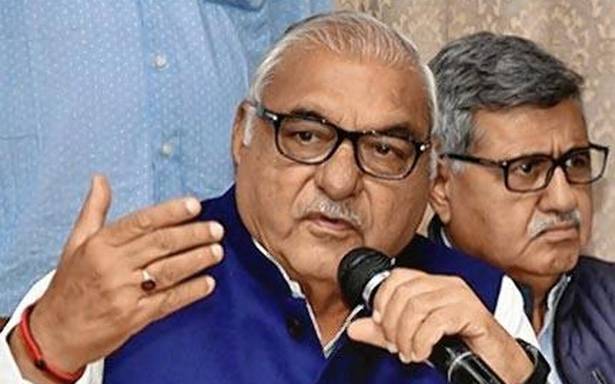 14 lakh quintals lying in open in the mandis, says ex-CM

Haryana’s former Chief Minister, Bhupinder Singh Hooda, had expressed concern over alleged mismanagement in purchase of paddy in the State.

Mr. Hooda, also the Leader of Opposition, said 14 lakh quintal paddy was lying under the open sky in the mandis but the government was carrying out procurement.

“The government itself had announced that it would start procurement from September 25 but there is no clarity on when this would start. While the government is dragging its feet, paddy of the farmers is getting spoiled due to the intermittent rains. Farmers have no other option but to sell their crops below Minimum Support Price,” he said. Addressing a press conference in Rohtak, Mr. Hooda expressed objection to the statement of the government not to buy millet.

“Earlier the government encouraged farmers to leave paddy and grow bajra and now it talks about not buying bajra. This is an anti-farmer decision,” he said, adding: “The government is promising to protect Bajra farmers under the ‘Bhavantar Bharpayee Yojana’ but this scheme has pushed vegetable growers to the brink of ruin. Therefore, the government should buy millet and every grain of all crops according to its promise.”

He said waterlogging remains a major problem facing the farmers even today as crops have suffered extensive damage due to excessive rain.

“Farmers have not got their compensation till now and there are many fields in the State that continue to be waterlogged and no arrangement has been made to drain out water. The government should soon compensate the farmers for the damaged crops..,” Mr. Hooda demanded.