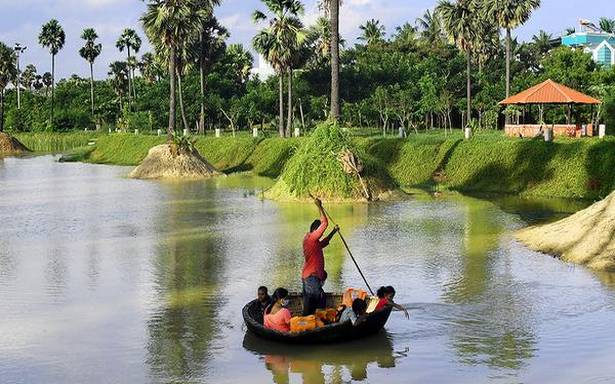 The Horticulture Park at Madhavaram Milk Colony, one of the large urban lung spaces in north Chennai, may soon have exotic plant species and a nursery.

The 22-acre botanical garden has been one of the few recreational spaces for residents of several localities since 2018. Coracle rides in the 2.5-acre freshwater pond in the park resumed recently, bringing cheer to the regulars. The demand for these rides increase during the weekends, with nearly 100 visitors enjoying them on Sundays.

The Horticulture Department has proposed to add more greenery to the park and improve facilities for visitors. The botanical garden is home to about 800 Palmyra trees and nearly 700 species of various ornamental and medicinal plants.

Sources in the department noted that the pond was also a groundwater recharge source as the rainwater harvesting system of the park was linked to it. There are plans to add flowering beds to the 10 Palmyra tree islands in the pond. The waterbody will also be used for rearing ducks. A nursery has been proposed to encourage visitors to purchase medicinal/herbal plants that they see in the park.

On an average, the park receives nearly 600 visitors during the weekdays, and the number peaks to about 1,000 during weekends.

Nearly 500 walkers regularly visit the park after paying a monthly fee. They said the park was a boon to them as otherwise, they would be vying for space on the roads or walk on playgrounds.

The Horticulture Department also has plans to improve facilities in the children’s play area and add a green cover to the 2-acre space adjoining it.

Infrastructure, already in place, to generate solar power will be operated to cater to the electricity needs of the park and the office buildings.