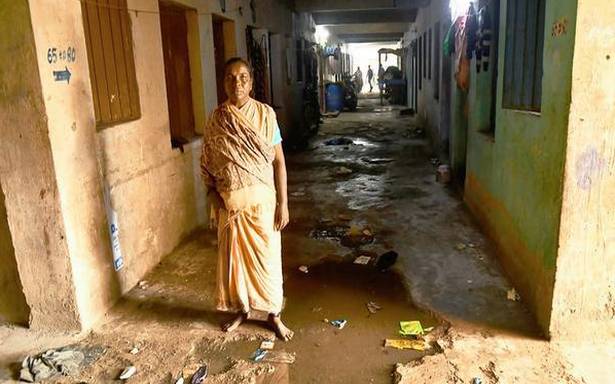 The recent collapse of Tamil Nadu Urban Habitat Development Board apartment block on Village Street in Tiruvottiyur has once again highlighted the problem of poor upkeep of the dwelling units in almost all places.

The dwellers at the site where the building collapsed complained that very little attention was paid to maintenance, except for plastering work in a few places once in a while.

The condition of apartment blocks in places like Kannagi Nagar, Ezhil Nagar and Perumbakkam is a case in point.

L. Manikandan, an autorickshaw driver and a social worker in Kannagi Nagar, says a key problem was seepage during rain and from damaged pipelines. It has been highlighted several times by many dwellers.

“The quality of the construction itself was poor, to begin with. To add to that, there is no periodic maintenance by the board. There is seepage on the ceilings and floors of most tenements, which worsens their quality. In two-storey structures in Kannagi Nagar, there is seepage from the floor during monsoon,” he said.

R. Mahalakshmi, who lives in a flat at a three-storey tenement in Kannagi Nagar, said the plastering was of poor quality.

N. Mary, who lives on the top floor of a building in Perumbakkam, said continuous seepage has led to the plastering of the ceilings falling. “The terrace does not have a proper slope. Hence, water does not drain easily if it rains or if overhead tanks overflow. My walls and ceilings almost always remain damp,” she said. There was hardly any response to the complaints made to TNUHDB, she said.

A. Veerappan, a retired Chief Engineer with the Public Works Department, said the collapse of a building that was only slightly older than 25 years and the dilapidated state of several such buildings was unacceptable. Apart from several issues related to poor construction, he said that the poor upkeep was a serious problem. Extensive maintenance was needed at least once in five years. “The residents of these tenements, who are generally poor with limited awareness, are not able to do the maintenance work by themselves or push the officials to do it,” he said. At least 5% of the board’s budget must be allocated for maintenance along with steps to ensure that the work was done periodically.