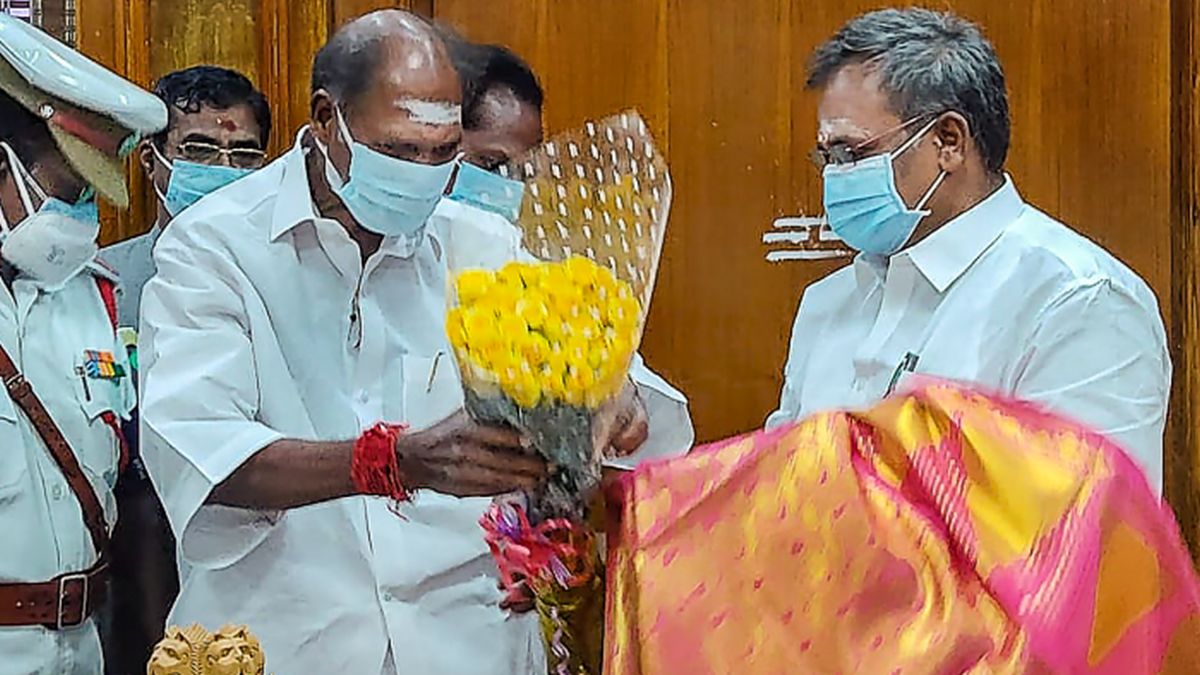 When Mr Rangaswamy began making threatening noises (he could have swapped the BJP’s six MLAs with the DMK’s six and formed the government with the outside help of the Congress and Independents), the BJP immediately named nominated MLAs.
Aditi Phadnis reports.

At last, Puducherry has a government. It took nearly a month, but finally, after extensive negotiations aided by the Bharatiya Janata Party’s Nirmal Surana and Rajeev Chandrasekhar, who helped craft strategies for the party’s election campaign, a council of ministers is in place.

Chief Minister N Rangasamy-led All India NR Congress is in command in a coalition in which the BJP is calling the shots.

There are several reasons why this government is so important.

First, in the last round of assembly elections, the BJP was able to conquer new frontiers like West Bengal, where it went up from three seats in the assembly to 77.

But Puducherry is the only new government it has been able to snag.

It is the second in south India. Unlike Kerala, where the BJP’s vote share actually dropped from 16 per cent in 2016 to 11.51 per cent in 2021, and Tamil Nadu, where it was unable to make much of a mark (it won four seats but proved to be a liability for the All India Anna Dravida Munnetra Kazhagam, its alliance partner), in Puducherry it cobbled an alliance together and won fair and square.

This is even more important when you consider that in 2016, it contested 30 seats and lost its deposit in 29.

The BJP considers the defeat of the Congress in Puducherry a double victory: The outgoing Congress chief minister didn’t even contest the election and the party could win just two seats: One from remote Mahe and the other from Lawspet, where the Congress candidate joined the party only recently.

But then why did it take nearly a month to form a government?

Apart from the fact that the chief minister was diagnosed with COVID-19 and had to be hospitalised, the nature of the result the election threw up was such that Mr Rangaswamy had many options.

The BJP’s primary demand was that that one of its MLAs be made deputy chief minister and the party get at least two more ministerships.

Mr Rangaswamy had his own compulsions. The maximum size of the Puducherry council of ministers is seven.

Obviously, the AINRC needed to keep the chief ministership.

It wanted five others plus the position of speaker. The BJP claimed the pre-poll pact was to offer the AINRC three positions including the chief ministership and the deputy speakership.

It also wanted one of its MLAs to be made deputy chief minister.

Mr Rangaswamy was having none of that and made it clear he had other options.

These options were obvious. The election netted the AINRC 10 seats and the BJP six in the 33-member Assembly.

The DMK has six MLAs and the Congress two, and there are six Independents.

But there are also three nominated MLAs who have the same voting powers as the elected MLAs.

When Mr Rangaswamy began making threatening noises (he could have swapped the BJP’s six MLAs with the DMK’s six and formed the government with the outside help of the Congress and Independents), the BJP immediately named nominated MLAs.

It helped that Lieutenant Governor Tamilisai Soundararajan was former president of the BJP’s Tamil Nadu unit.

This pushed up the BJP’s tally to nine, making it the second-largest party.

The ‘suggestion’ that other independents join the party is still on the table.

It took Mr Surana (primarily) and Mr Chandrasekhar the full extent of their negotiating skills to get Mr Rangaswamy to agree and concede speakership to the BJP.

A six-member ministry with four from the AINRC, including the chief minister and two from the BJP, will now rule Puducherry. A cabinet expansion is possible in the future.

A word about Mr Surana. His name suggests he is from Rajasthan, but he and his family have been fixtures in Karnataka for many years.

A low-profile, dyed-in-the-wool BJP politician, he is a former MLA from Bengaluru, is identified with the anti-Yediyurappa camp, and is considered a protege of BJP National Secretary B L Santhosh.

He was sacked from his position as vice-president to quell factionalism in 2017 after B S Yediyurappa took over as Karnataka party president in 2016.

When Nalin Kumar Kateel took as state president in 2019, one of his first decisions was to reinstate him.

Soon after the Puducherry elections, he was elevated to the BJP’s core committee in Karnataka.

He is Mr Santhosh’s eyes and ears in Karnataka and now, has more credibility than before, having delivered Puducherry.

This is important because while Mr Rangaswamy will be a factor in the politics of Puducherry for the months to come, Mr Surana’s place in Karnataka politics has also been secured.

So it is two victories for the price of one!