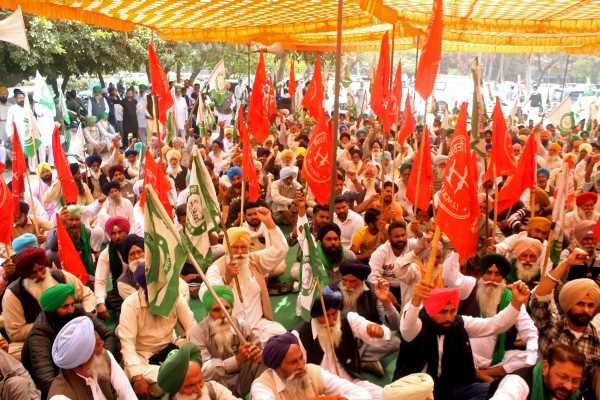 The unity seen among the SKM leaders and the one voice in which it spoke against the Centre’s MSP panel are a change from the bitter wrangling the grouping had seen since the agitation was called off, reports Sanjeeb Mukherjee.

After almost eight months, the Samyukta Kisan Morcha, the conglomerate of farmers’ groups across India, is once again in the spotlight.

This time, the Centre’s move to form a 29-member panel on making the minimum support price mechanism effective and keeping three positions vacant in it for SKM representatives has triggered strong disapproval from it.

SKM leaders have termed the composition of the committee and its terms of reference a breach of trust and the assurance the government had given at the time of repealing the three farm laws and the suspension of the agitation.

Their argument is that the Centre’s letter to them, while calling for an end to the agitation, had said that a panel would be formed to study the means to ensure legal backing to MSP, something the terms of reference of the committee do not mention.

Putting the wrangling behind

The unity seen among the SKM leaders and the one voice in which it spoke against the Centre’s MSP panel are a change from the bitter wrangling the grouping had seen since the agitation was called off.

Though some insiders say dissent and dissension have been part of the SKM since the beginning and should be read as reflecting the democratic nature of the organisation, the passage of arms for the past few months was absent during the protest days.

Even if there was a voice of dissent and discord during the year-long agitation on any issue, it was quickly brought within control in the interests of what they were fighting for – the repeal of the farm laws.

This was remarkable, given that the SKM never boasted a common leadership and did not have one common faction leading the movement.

Though there were groups that commanded more people and resources, they all merged for their united cause.

The spirit behind the movement

Since the beginning, Punjab-based farmers’ organisations and the various factions of the Bhartiya Kisan Union were the bedrock of the SKM because they had the numbers and resources.

The unity shown by the Punjab-based factions of the SKM and their strident opposition to anything less than the repeal of the farm laws were the main reasons for the government acceding to their demand.

The fact that these organisations and their people on the ground managed to build a cohesive narrative against the laws and how they (the laws) could destroy the well-set mechanism of MSP and procurement in Punjab was one of the prime reasons for the massive mobilisation they managed for the year-long protests on Delhi borders.

The elections and farmers

Surprisingly, it was in Punjab that the cracks first started appearing in the SKM, barely months after the protest was called off.

First, just before the Punjab assembly elections this year in February, two of the core committee members of the SKM, Balbir Singh Rajewal and Gurnam Singh Chaduni, formed their separate political outfits to cash in on the popularity of the farmers’ movement in the electoral arena.

Rajewal formed the Samyukta Samaj Morcha, which claimed the support of 22 farmers’ unions, and Chaduni also went his way and formed the Sanyukta Sangharsh Party to fight the Punjab polls.

The two nascent political formations also joined hands ahead of the polls and entered into a seat-sharing arrangement.

Rajewal and Chaduni were among the two most vocal and visible faces of the agitation in Delhi.

But none of them managed to make any sizable impact on the Punjab poll results and several of their candidates lost their deposits.

The move, however, angered the remaining constituents of the SKM, which had vowed to keep the formation apolitical and not to align with any political party during the agitation.

In fact, to the credit of SKM members during the agitation, leaders from political parties, even if they were sympathetic to their cause, were seldom allowed to share stage with farmers.

At a meeting in Delhi in January, the SKM leadership officially announced that the farmers’ groups who were taking part in the assembly elections were ‘no longer’ part of the SKM.

A few weeks ago, the organisation split again with two more core committee members of the SKM –Jagjit Singh Dallewal and Shivkumar Sharma ‘Kakkaji’ — holding a convention of about 30 farmers’ organisations.

They said their effort was to ‘depoliticise’ the SKM and announced a parallel grouping in response to the SKM’s call for protests starting from July 18 against the Centre.

Kakkaji is a former leader of the Bharatiya Kisan Sangh, affiliated to the Rashtriya Swayamsevak Sangh, while Dallewal is president of the Bhartiya Kisan Union, Ekta-Sidhupur, which has considerable influence in the Malwa belt of Punjab, which is a cotton-growing area.

Interestingly, Dallewal and Kakkaji are opposed to allowing the Punjab-based organisations that split ahead of the state polls to fight polls, to rejoin the SKM.

The old SKM now wants to take a few of them back because they have apparently realised ‘their mistake.’

Not only in the SKM, even within the Bhartiya Kisan Union of Rakesh Tikait, which led the agitation on Delhi’s borders with Uttar Pradesh, the organisation has split with a section calling itself the BKU (apolitical).

This new offshoot, too, is opposed to any political involvement, while Tikait and others have alleged that this is part of the ruling Bharatiya Janata Party’s effort to weaken the farmers’ movement.

Clearly, the SKM, which held out so much promise during the farmers’ agitation of being a voice of the farmers, is showing signs of cracking.

For an average farmer, only time will tell which is more harmful: The breaking up of the SKM or its decision to keep away from the Central panel on MSP — that would have for the first time given it a seat on the high table of policy-making.