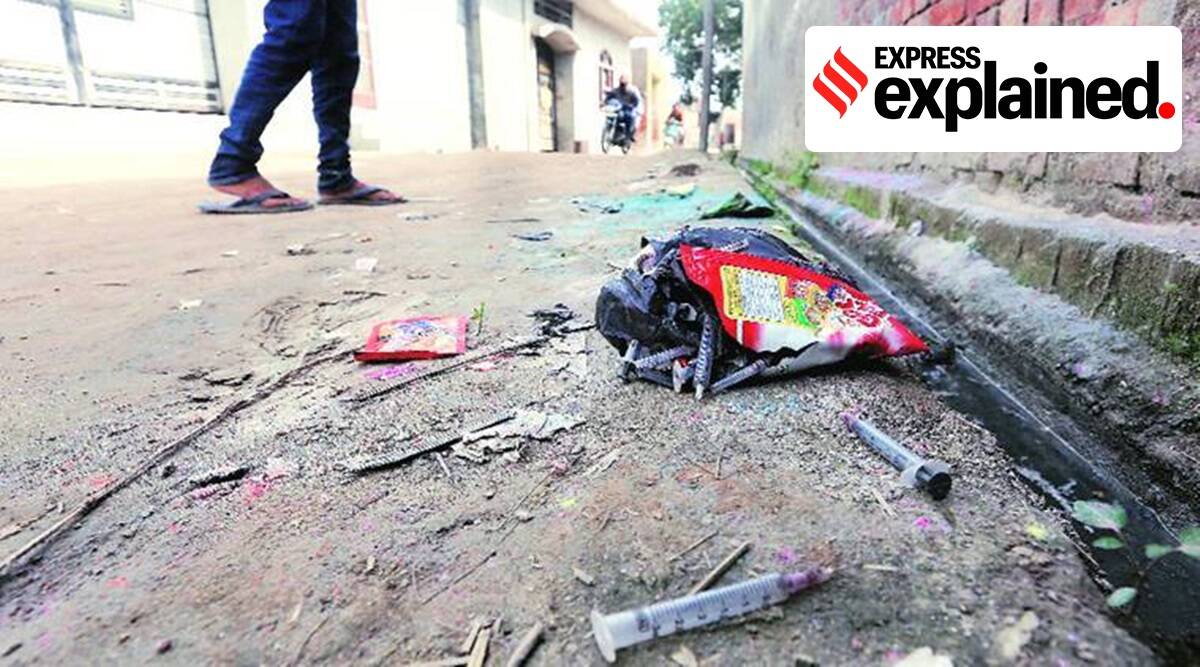 The Indian Express explains how the cops managed to get the better of drug peddlers in several instances in the recent times. Even as drug smugglers frequently changed tactics to outsmart cops during the lockdown, the Haryana Police managed to bust several smuggling attempts leading to large seizures. The Indian Express explains how the cops managed to get the better of drug peddlers in several instances in the recent times.

What is the extent of the drug problem in Haryana?

The police officers admit it as a major problem. Explaining its reasons, DGP Manoj Yadava says, “Haryana is one of the highest per capita income states. And drugs go where the money is. The market is here because people are prosperous, they have time. In a poor state, who will consume expensive heroin?” Earlier, Yadava adds, Punjab was a great market. Since Haryana shares a long border with Punjab, the state has been used as a transit route to smuggle drugs. Police officers believe the heroin mostly comes from Afghanistan and Pakistan and it is transported straight to Delhi, fromwhere it redistributed to Haryana and Punjab. “The people who were delivering it in Punjab, developed a market in Haryana. The dhabas on national highways have emerged as distribution points. “We have seen the appearance of Punjab type cases in the bordering villages of Haryana’s Sirsa, Fatehabad, Jind, Ambala, Kurukshetra and Kaithal districts which have socio-cultural similarities like that of Punjab villages.”

What is the major fallout of drug smuggling?

It has led to an increase in crime, police officials say. For some times an addict is able to finance expenses for his addiction from the family money or his own money. When he runs out of money, “he starts committing crime or starts working as a redistributor. For example, if he buys 25 gm of a drug, 15 gm from it, he sells further. This module finances his consumption,” says Yadava.

Police officials add that drug addiction has been found to be the main reason behind the incidents of snatching and vehicle theft. Once a person becomes addicted, he becomes dependent even if he is in the most productive stage of life. Because of this habit, families are destroyed apart from causing damage to the socio-economic set up in the society.

How do smugglers try to mislead cops?

Sometimes heroin is smuggled in bulk even during legitimate trade between India and its neighbouring countries like dry fruits. Yadava, who 16 years in Intelligence Bureau (IB), recalls a case unearthed by Delhi Police: “Walnuts are supplied to Delhi from Afghanistan. Once, the smugglers got prepared bags of special fabric. These fabric bags were dipped in the liquid solution of heroin. The fabric absorbed the entire heroine. Then, walnuts were packed and 500 boxes were supplied to Delhi. When it was unloaded, the trader took out walnuts and the bags were transported to a laboratory where they were again put into water and the heroin extracted”.

How smugglers try to take advantage of lockdown?

Large quantities of drugs land in Delhi directly. From here, they are supplied for retail purposes. The smugglers have developed secret cavities in expensive vehicles. “Normally, policemen don’t stop such vehicles especially when women too are travelling in such vehicles. Sometimes such a woman says she is going to Shimla with her spouse for a honeymoon,” says Yadava. 📣 Express Explained is now on Telegram. Click here to join our channel (@ieexplained) and stay updated with the latest

With government instructions that cops should not stop vehicles with emergency supplies like edible oil, medicines, medical equipments and ambulances during the lockdown period, the smugglers have started taking advantage of this situation by using similar vehicles. Yadava recalls how the Haryana Police seized such a van in Sonipat district which was being used by the drug smugglers for smuggling purposes. This van was earlier used by an organisation for milk supply in Delhi. The smugglers bought it in an auction and started it using for smuggling purposes after printing “Delhi Milk Supply” on it.

How is police trying to outsmart drug smugglers?

Keeping in view the new challenges, the police started focusing on dismantling the smuggling network rather than going after the retail peddlers at the street-level. It targeted major inter-state smugglers.

Further, Haryana is not a production centre of any of the narcotics and different narcotics come here in different manners. Opium and bhukki enters into Haryana from Rajasthan while ganja comes to Haryana from Odisha. Police opted for a different strategy for every drug. Instead of catching small fishes, it focused on nabbing big players. Yadava says that data of recovery of drugs is self-explanatory for it. For example, in 2019, the state police seized 119 kg opium while as many as 515 kg opium was seized in 2020. Similarly, the recovery of charas/sulpha increased from 115 kg to 226 kg in the same period. Nearly 12,000 kg poppy husk was caught in 2019 while this figure was nearly 15,500 kg in 2020. The recovery of smack increased from 17 kg to 34 kg while the recovery of heroin increased from 17 kg to 31 kg during the same period of one year. Ganja’s recovery had gone up from 5,500 kg to 9,000 kg in one year.

“That means, we focused on catching the bulk of drugs instead of just 100 gm to 200 gm of drugs. We tried to catch the drug as it was entering Haryana. Like, we caught 2,261 kg of poppy husk from Sonipat in a single case.” Yadava further says, “Another major change we made was seizing of the drugs from the source. It’s like tax deduction at source. If the drugs are distributed, then we have to catch at least 100 people to neutralise the same quantity of drugs.”

Not only this, the Special Task Force (STF) caught seven gangs of interstate smugglers including those from Bihar, Jharkhand and Rajasthan when they were trying to smuggle big quantities of drugs into Haryana.