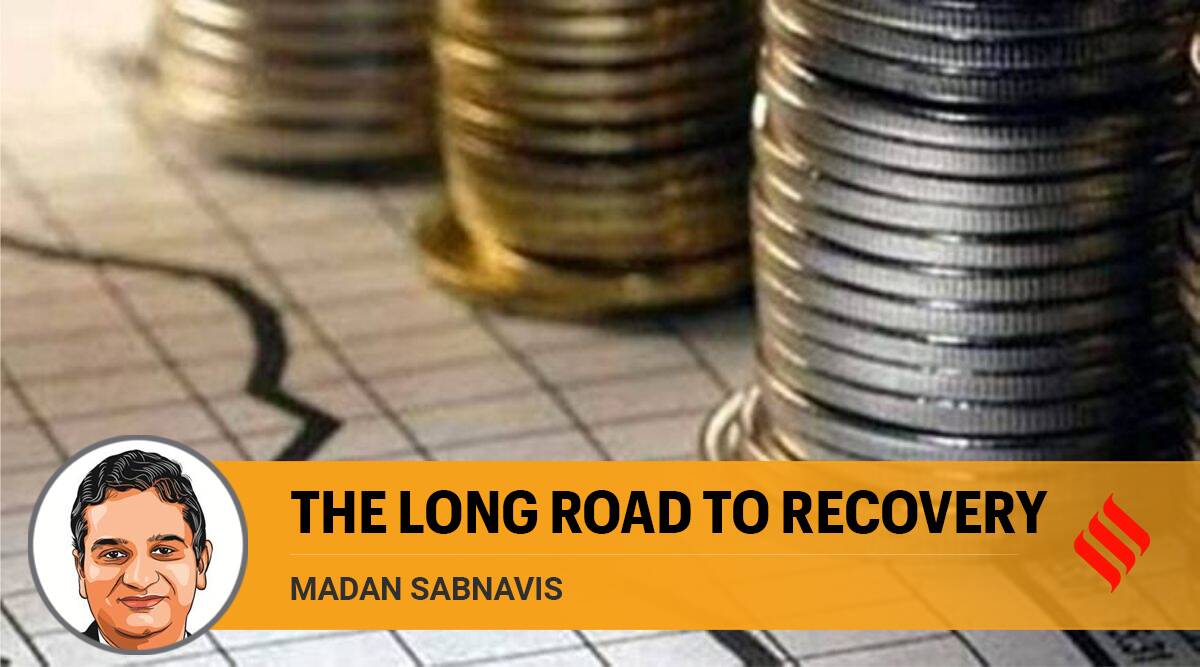 Madan Sabnavis writes: A few different factors must be kept in mind. And beware of any big growth numbers being interpreted as indicative of recovery. How is one to judge the state of the economy? GDP growth estimates range from a high of 11 per cent, as per the government, to 9.5 per cent as per RBI, while private forecasts could go lower. CARE Ratings’ forecast is 8.8-9 per cent. The variation is stark. A ridiculously priced stock market and high corporate profits have been used to vindicate the view that the economy is on the high growth path. Can one take a dispassionate view?

Three things should be kept in mind when evaluating the state of the economy. First, since the economy contracted by 7.3 per cent in 2020-21, all numbers will be exaggerated in the upward direction. Hence beware of any big growth number being interpreted as indicating a recovery.

Second, because of the lockdowns this year for two months, June is bound to be better than May and July better than June and so on. Thus, beware of interpretations based on single-month data. Cumulative numbers are better at times, but can be misleading too.

Third, what is more important is how things will play out during September-December as this is the festival-cum-harvest season which engenders spending normally.

And last, one should sift through the noise in the media, where the optimistic stance that the pandemic is behind us and there is acceleration in the economy can tend to be overstated. Often policies announced are interpreted as having already led to results. A classic example is the Production Linked Incentive scheme, which is a great policy but will work only after three years as those are the terms of engagement. Speeches and presentations made on this subject tend to be biased in a positive direction. Ask the question — are jobs being created and are people spending more?

Several indicators are used as leading signals of the economy. But here, too, we need to be careful. PMIs for manufacturing and services tell us if we are better off than the previous month. But that is not how data is normally presented as we usually talk of year-on-year growth. But it is an early signal for sure. The IIP and core sector numbers will be influenced by base numbers and come with a lag. Exports have been touted as being a driver of the economy. But remember exports fell by around 17 per cent last year. GST collections are a good indicator of consumption but tend to be volatile. Besides, the Centre has estimated already that it will have to borrow Rs 1.5 lakh crore to compensate states this year, which means that there will be shortfalls again. We need to look at the bigger picture and not get swayed by headlines stating that we have clocked over Rs 1 lakh crore collections for the “nth” month.

The best indicators on the state of the economy come from the financial sector. Bank credit is a good indicator of whether companies are producing more as all activity requires working capital. Here, the picture is not good as growth is (-) 0.4 per cent as of July end, indicating that activity has not picked up yet. The SMEs, in particular, have been affected in the second round and will take time to recover. Several services like entertainment and retail malls have not yet commenced operations on a reasonable scale. Hotels and restaurants have just started commencing operations in some states. Therefore, credit growth is in the negative territory.

The debt market tells us if investment is on the cards. There has been a lot of talk on various schemes being implemented for reviving investment. If this were happening, money must be raised. Debt issuances are lower in the first four months at around Rs 1.25 lakh crore, which is half of the Rs 2.57 lakh crore mobilised last year. Therefore, the investment scenario is still one where companies are watchful. There is surplus capacity in industry with utilisation rate being at 69.4 per cent in March 2021.

A pragmatic way to look at things is to observe the patterns in the coming months. Rural demand is an integral part of the story and presently progress on the kharif crop is satisfactory. There are concerns on cotton and oilseeds and September will be critical here to judge if the area under cultivation reaches normal levels. A good crop is also necessary to generate spending power besides augmenting supplies in the market as well as food processing industry. The second wave has pushed back rural households with more expenditure on health care. This can be reflected in lower spending post October.

Employment generation is a trigger for higher income and spending and while the battle between CMIE and EPFO data remains unresolved, the market will finally reveal if people have more money. Inflation is high and though there is a view that it is transient, this may not be the case as several households, who are living on a fixed income have witnessed a double whammy in the form of lower returns on deposits (that’s why everyone is flocking to the stock market), and cumulative inflation of 6 per cent last year, and a similar number this year. The pent-up demand story played out to an extent last year and expecting it to be replicated may be bordering on reckless optimism.

Investment will trail consumption and while the Centre has a good capex plan, it is only one piece in the overall puzzle. The private sector must get involved and with the banks being hesitant, the road can get longer.

This column first appeared in the print edition on August 27, 2021 under the title ‘The long road to recovery’. The writer is Chief Economist, CARE Ratings and author of Hits & Misses: The Indian Banking Story. Views are personal.