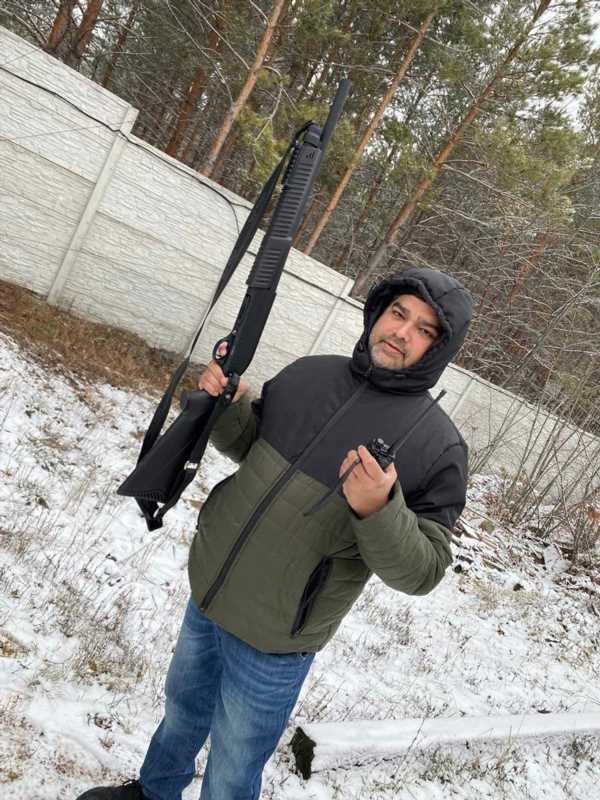 ‘I want to show that we are also part of this society and want to participate just as much, whether it is for security or whatever community work there.’

He can longer hear the chilling boom of bomb explosions or the plaintive air-raid sirens, both of which had become a frightening many-times-a-day occurrence in Russian-besieged Kyiv.

Secondly, now he possesses a gun.

And a basement too. On Monday, Manoj, who runs a pharmaceutical business and lived near Zhuliany airport in southeastern Kyiv, took a decision to leave town.

Authorities had been urging people to leave the city soon. In an interview to Vaihayasi Pande Daniel/Rediff.com, that moved interchangeably between Hindi and English, over a WhatsApp call from Ukraine, he says they were told: “Kyiv se jitne door ja sakte chale jaiy (The authorities asked people to go as far from Kyiv as possible).”

He bundled his family — a conscription-age 19-year-old son, a teenage daughter, his Ukranian wife — into their Toyota Camry along with food supplies, a few clothes, their passports and fled Kyiv for the quiet wee town of Obukhiv, population ~33,000. 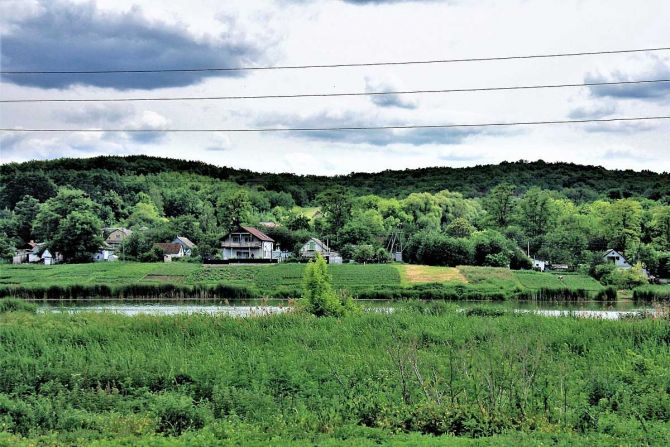 Their flight from Kyiv was without a hitch, fortunately. There were Ukrainian check-posts every two or three kilometres, where their documents and luggage were scrutinised.

“Mujhe koi dikkat nahin hua. Woh dekhte the family ke saath ja raha hai, bacha hai ghadi mein, khane peene ka samaan. Matlab Kyiv city chodh ke bhag rahein hai (We had no problems. At the check-posts they saw it was a family, children are there in the car, food and all signs that it’s a family running away from Kyiv).”

Obukhiv was chosen because Manoj had an Indian friend there who had a house spare. “Woh India nikal gaye (He left for India). He said I am going if you want to come, come along and shift here. I moved with my whole family, since it is 40 km away from Kyiv (and the scene of fighting) and therefore comfortable.” 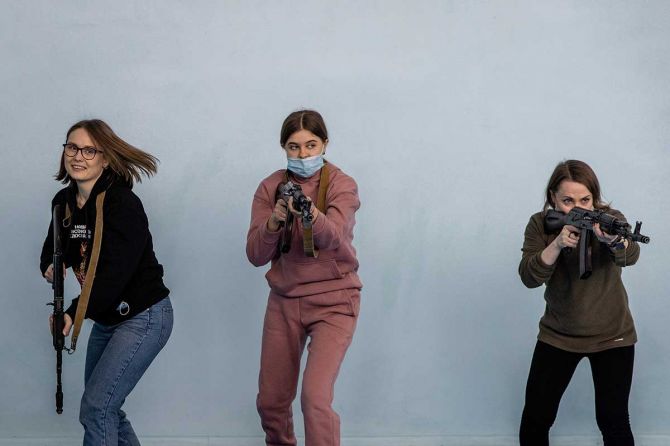 This newly adopted home is part of a commune of 50 farmhouses, but half of the homes have already emptied out, their residents fleeing Ukraine. Manoj is the only Indian amongst the less than 25 families still staying back to face the Russian-engineered madness.

In this area, the Ukrainians have banded together to organise their self defence, and a local “commander” kind of chap has taught them how to patrol with shifts, armed them with local-make guns, showed them when and how to use them. Manoj and his son are now part of a local citizens’ contingent keeping the area safe.

“From every house one man should be available to provide security service two hours a day. Of the 50 houses there hardly 10 men for this service. Iss samay hum log 8-10 log ka team banakar khud hi, hathiyar leke, boundary line par hum phera dete hai (At this time we have organised ourselves into a team of 8-10 and are wielding weapons ourselves as we take rounds along the boundary).” 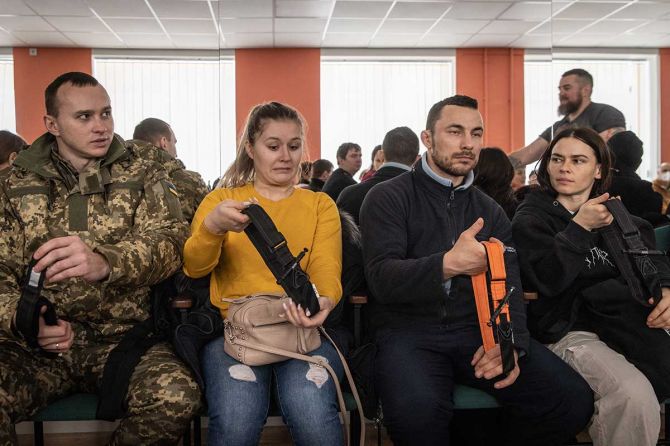 Does he know how to operate a weapon?

He laughs heartily. When there are situations to face that cannot be borne, it brings out the hero in all of us. It has for Manoj too.

He confesses cheerfully: “Idea toh nahin hai weapon samalna (Don’t have an idea how to manage a weapon).” But he explains they all have walkie-talkies and instructions that if they spot a dangerous object/human they are to alert everyone.

Their commander, who “knows all about weapons” has given them each a rifle in case they come face to face with danger. If it is a suspicious “unknown” person then “saamnewallah ko distance se poocho ki kyo hai udhar. Agar nahin rukta hai, toh hava par firing karna hai (ask from a distance why he/she is here and if he/she keeps advancing to shoot in the air).”

There is no danger of the gun going off accidentally, he says. “Button hai jo off kar ke rakhta hai. Haath mein le ke ghumein toh galti se dab nahi sakte (There’s a button that keeps the gun locked/uncocked and even if you have the gun in your hands and are on rounds that button cannot get accidentally pressed).” Manoj or his son put in two hours of patrolling night or day. He is very keen to be there for the community and do this duty because he would like to show his loyalty for his adopted land, that took him in warmly 30 years ago, when he came to Kyiv to study aeronautical engineering.

“Mein jaan buch ke unko service de raha hu (I am in a very deliberate manner offering my services). I want to show that we are also part of this society and want to participate just as much, whether it is for security or whatever community work there and give the message ki hum aapke saath mein hai (we are with you). I don’t want to say: ‘I am Indian and I have nothing to do with this fight’.”

Manoj’s message of support, humanity and brotherhood, ironically, is quite different from the message coming out of New Delhi. Life is peaceful and simple in Obukhiv. The war that the Ukranians did not invite has not yet come brutally marching into the sleepy town. All the facilities around them — water, electricity, gas, Internet, groceries, chemists, petrol pumps, banks — are up and running.

Obukhiv is a far cry from those awful few days in Kyiv after Russia mounted its attack.

Leaving for India was not a choice. “I am the single Indian in the family.”

His son — like his wife and daughter — has a Ukrainian passport and as per the emergency laws, in effect in Ukraine at the moment, any man above 18 or below 60 cannot leave.

Manoj clarifies they may not need to fight, but must stay in the country. “Not just golee chalane ke liye. Army mein dus tarah ke service hoti hai, like as a supporting hand (not for firing bullets. The army here has 10 kinds of service, like being a supporting hand).” No one was prepared for the Russian invasion — most had not stockpiled food or cash or medicines or made arrangements, because, as Manoj emphasises, the Russians, right till February 23, had falsely promised that he had no plan to attack.

“Jab hum Kyiv mein the wahan daily siren bajta tha. Fighter planes upar se udte dikh raha tha. Do-teen baje raat kuch awaz aa jaye, tho bahar nikal ke dekhna padta tha (When we were in Kyiv, sirens went off daily. Fighter planes were visible flying overhead. And at 2am-3 am if there was some strange sound you had to go out and check).”

When other options might exist, he was chary of taking his family and seeking refuge in one of Kyiv’s bomb shelters or the elegant metro stations. Up until when the war began, Kyiv was suffering 25,000-30,000 cases of Omicron a day, according to Manoj.

He feels immense anger, on behalf of the Ukrainians, and personally with both the US and Russia.

“Mein bahut chota aadmi hoon but from whatever I am understanding politics hai, aur public pareshan ho rahi hai. World politics hai, geo-politics hai. America aur Russia ka ego hai (I am a small man, but to me it seems all politics and the Ukrainians are being harassed. It is world politics, geo politics. And it’s about American and Russian egos).”

And if it is just geopolitics, why, he asks in pained puzzlement, do Russia and America always victimise a third country in their war games? 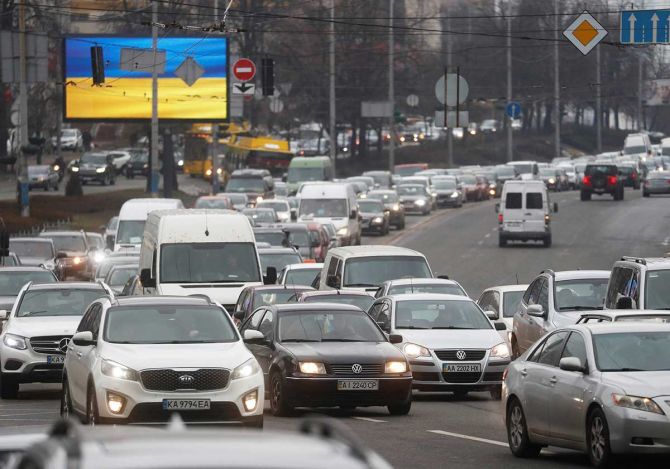 The European Union offer, in his considered opinion, has come way too late. Why could they not have stepped up their offer a few weeks before when war was brewing, he wonders.

“They want to make Ukraine another Afghanistan. Abhi EU mein le kar kya fayda? Aap khandar le loge is desh ka? Sarein pul, infrastructure nasht ho jayega dus din mein. Aap kya loge?(What is the use in taking Ukraine in the EU now? Are you going to take the ruins of this country into the EU? All the bridges, infrastructure will be flattened in the next 10 days. What will you take?)”

He continues, “Already 50 per cent population EU mein jayenge, Germany, France Italy mein shift kar jayenge. Ukraine jaisa khandar mein vapas toh nahin aayenge dubara. Na factory rahegi, na rozgar rahega, na kuch bhi rahega toh vapas kyo aayenge Ukrainians (At least 50 per cent of the population has/will leave for the EU and shift to Germany, France Italy etc. And later they will not come back to the ruins of Ukraine. There will be no factories or means of earning. There will be nothing. What will they come back to?)”

With a sad finality, he concludes, “Kisko loge? Kaun sa desh loge? Jo Ukraine aaj hai, dus-pandra din mein rahega nahin. (Who will you [the EU] take? Which country will take/give membership to? The Ukraine that exists today will in 10-15 days no longer exist.)”

But even as he has been forced by history to take a ringside seat to observe the destruction of a country he has come to love deeply, Manoj is bowled over by the bravery of the Ukrainians. Their bravery is so heartening and he says after living 30 years in Ukraine he has learned — “Mein pehle se jaanta hoon” — what kind of people they are — their courage, strength and do-or-die nature.

In astonished awe, “Jo public ne response diya hai! Yahan army se zyada public aa ke road par khadi ho gayi hai. Tank ko rok rahi hai. Tank ke neeche leyet ja rahein hai. If the tankwallahs don’t listen they are bringing bottles of petrol (Look at the response the public has given! More than even the army, the public is on the road defending the country. Stopping tanks. Lying down on the road in front of a tank).”

“‘Tum chale jao! Agar andar aaya, tum ko bhi maarna padega. Ghusoge toh zinda vapas nahin jaoge‘ (‘Leave from here. You are also the son of some mother or father. We don’t want to kill you. Just leave! But if you come into our land, we will have to kill you. And you won’t return alive’).”

“Primary force border par public hai. Army peeche hai (The first force the Russian invaders have to contend with is the Ukrainian public. The army is behind).”

The interlude in Obukhiv offers the Kumar family solace. But Manoj contemplates the future with despair. He left Patna for Ukraine 30 years ago to seek his fortune (the only family left in India is a sister, who is a scientist in Kolkata) and ever since he began his business in 2007 his prospects are entwined with Ukraine’s.

“Ukraine is a beautiful country. Mujhe personally bahut afsos hai ki mere pura 30 saal ka mahinat, kamaiee, investment ek mahine mein barbad ho jayega. Forty-eight plus age mein kya karenge? Kya business karenge? Kya job karenge? Mera high investment hai iss country mein. Ukraine ke liye koiee ladne marne nahin aa rahein hai (I feel personal grief. My 30 years of labour, earning and investment is going up in smoke. At the age of 48 what will I do? What business? What job? I am invested in this country. And no one is coming to fight or die for Ukraine).”

Even though the future in unknowable, for the next two months the Kumars are safe. 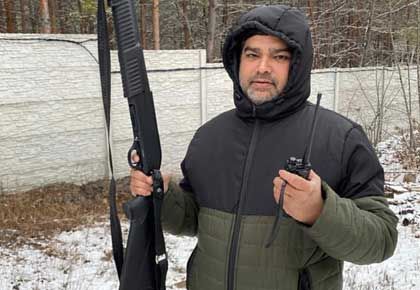