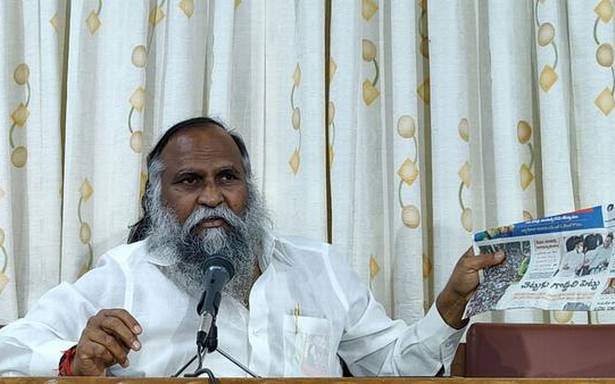 Sangareddy legislator Jayaprakash Reddy has clarified that he was not the agent of Chief Minister K. Chandrasekhar Rao as is being propagated on social media by highlighting his picture with MA&UD Minister K.T. Rama Rao, which was shot in an official function.

“As the local MLA, I participated in an official programme and had a normal conversation with him seeking funds for Sangareddy. What is wrong in it?” he asked, while displaying an old picture of TPCC chief Revanth Reddy with KTR. “Does this mean Revanth Reddy and KTR also colluded?” he asked while warning those spreading ‘canards’ about him.

At a media conference here on Sunday, he said that he would continue to criticise KCR, KTR and the government on policy issues, whenever required. “No one fought with KCR like I did during the Telangana agitation,” he said, while recalling how he stalled the entry of KCR in Sangareddy when the agitation was at its peak. “If I want to join the TRS, who can stop me?” he asked taking a dig at his detractors on social media.

He said those accusing him of being a TRS covert in the Congress should explain why I put up my wife as the Congress candidate in the local body MLC elections against the TRS candidate. He said that Mr. Revanth Reddy should condemn such campaigns on social media.

Mr. Reddy said that he would raise these issues in the Political Affairs Committee meeting to be held this week while appealing to the cadre not to get confused over the social media campaign on his political future in the Congress.