‘The place I used to sleep in the jail had a big window high up on the opposite side, where at sunrise and sunset time a bird would drop in every day.’
‘It could be an eagle or a peacock. And sometimes a monkey.’
‘Those moments calmed you, brought hope…’

Activist Teesta Setalvad spent 63 days in jail and seven days in remand following the Supreme Court’s strictures against her in its verdict dismissing Zakia Jafri’s petition against the clean chit given by the special investigation team to then Gujarat chief minister Narendra Modi and others in the 2002 post-Godhra riots cases.

Enlarged on bail recently, Setalvad is unfazed by what she went through, and continues to believe that journalism or activism is about a small individual effort at social transformation, change.

Which books did you read in jail?

I read books of political prisoners from Argentina and Chile. I read Gitanjali Shree’s latest book which won the Booker Prize. I read P G Wodehouse and also read thrillers. I read The Making of Indian Constitution which is a formidable volume. I also read Orhan Pamuk.

I was reading 4-5 books a week. It was tough because barrack spaces were noisy. You make friends with jail inmates but for them reading was not a priority.

There was a study centre at Sabarmati jail and my battle with jail authorities was that why were they not keeping it open all the time. They used to say they do not have enough staff. But I could manage to get it open two to three times a week where I could sit as there was silence in that centre.

Was the barrack very noisy for you to read?

Yes, it was noisy. I don’t know whether it was the confined space issues, but women tend to talk very loudly in the barrack. They used to shout and scream.

Abuse is very normal. Sexist abuse, and I use to tell them if they have to abuse, then they must swear in men’s name and not their mothers or sisters. This caused humour and consternation….

Was it a small room in jail with a lot of women inside?

No, it was not a small room. It was a large room, barrack 6, with 24 women in it. There were children too, four to seven at a time, and pregnant women too in the barrack.

There was a large one room and some of us used to sleep on one side and others on the other side. There was one toilet and bathroom for 24 people inside during closed hours.

One toilet for 24 people?

That was inside our prison room, but many toilets outside the room. And when the barrack used to shut, there was only two toilets and a bathroom for 24 of us.

Outside the barrack there were other toilets which were used by women prisoners of other barracks too. And by turns you have to clean the space, the barrack, the bathroom, toilets.

Did you also clean toilets in prison?

Yes, in turn though many helped also, because if you do not participate, you will not get respect in the prison from fellow inmates. There was shared work.

Do prisoners get any personal comfort like, say, hot water?

No hot water. In the first week I was sleeping on a chaddar (bedsheet). After that I requested for a mattress and I got one thin mattress. This was the only comfort I got.

I stayed like a common prisoner and did not ask for any privileges. I was wearing my own clothes as I was an undertrial. Prison clothes are only for convicts.

I had a set of three to four sets of clothes with me. We all of us washed these in turn each of us… 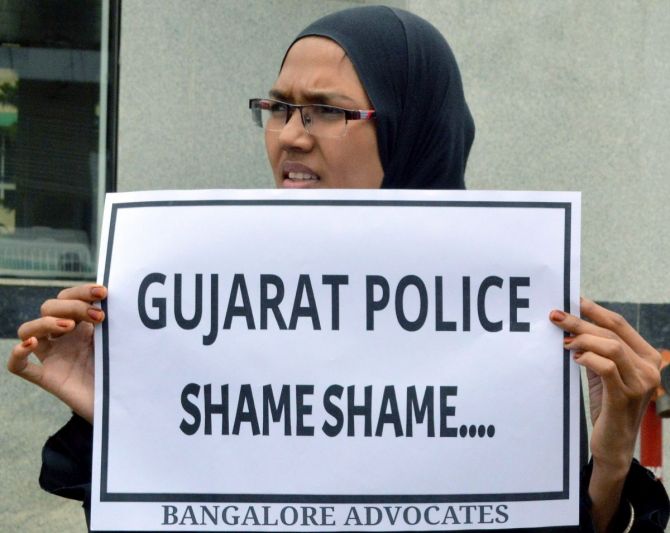 When you saw the open sky while in jail, what went through your mind?

You yearn for the green areas from within and without the barrack and surroundings in jail. It has nice plants and nice flowers. There were lots of peacocks in the jail and everyone used to look at them. Other birds too, squirrels, one black cat whom jail saathis had laughingly named Arjun. He would visit the quadrangle every night when we would be gazing out through the bars where freedom lay.

You keep finding solace in these things. The place I used to sleep in the jail had a big window high up on the opposite side, where at sunrise and sunset time a bird would drop in every day. It could be an eagle or a peacock. And sometimes a monkey.

Those moments calmed you, brought hope… were the times I could feel solace in the jail.

What did your family go through?

My family and extended family were amazing, are amazing…They were talking to the legal team and pushing whatever was possible: My legal team is the best (they are kinda family too!) but still for the family it is not that easy.